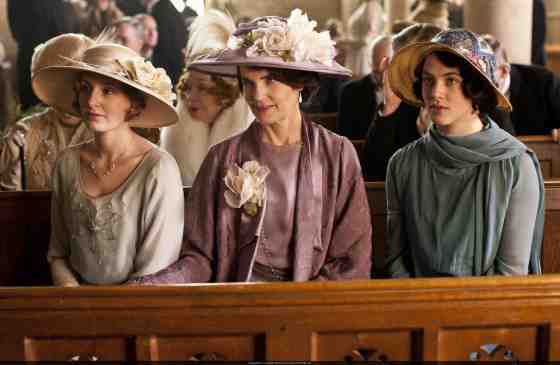 The Season 3 premiere of Downton Abbey will eclipse pretty much every other pop culture topic for the next few days, the Twitterverse brimming with #Downton, #teamservants and the like. For this reason, I will undoubtedly find myself in a position which has become all too commonplace in my life. In the last two or three years, the following exchange, or some variation on it, has happened more times than I can count.

The incredulity of that friend, co-worker or acquaintance isn’t without justification. Anyone who knows me even casually is aware of my almost diagnosable obsession with movies and near inability to not guide the majority of my conversations into the realm of cinema in some way. Given my love of film and the cinematic quality of most television dramas, it would make sense to assume that I would be up-to-date on Mad Men, Downton Abbey, The Walking Dead and Breaking Bad.

Alas, this is not so. I’ve watched the first season and a half of Mad Men and, while I greatly enjoyed the acting and beautiful set design, I couldn’t connect with any of the characters or story lines. Breaking Bad has a terrific premise, but I couldn’t even make it to the end of Season 1 because it felt, to me, like every episode was just another installment of “Uh oh! How is Walter White going to get out of this one?” I stayed with True Blood until the end of Season 2, but I really had no inclination to pick it back up when Season 3 premiered. I will admit that I haven’t yet attempted Downton Abbey, but that’s just because it doesn’t peak my interest at all, despite its incredible reviews and loyal fan base. If I want to eavesdrop on the lives of British aristocracy, I’ll watch Joe Wright’s brilliantly-directed Atonement for the umpteenth time or revisit Gosford Park.

Game of Thrones, Boardwalk Empire, American Horror Story, Deadwood. I’ve tried them all and none have really gripped me the way I was by films like Drive or Cabin in the Woods (both of which I have re-watched half a dozen times). Please believe me that this is not some hipster desire to be “outside the mainstream” or to turn my nose up at popular culture. (I will admit to anyone that I love Modern Family; it doesn’t get much more mainstream than that.) I just haven’t found many TV dramas as engrossing as the movies I can re-watch at home or find at my local indie cinema. The few series I have watched loyally (Dexter, Homeland) are time and again nominated for or winning Golden Globes and Emmys, but no one I know actually watches them!

We are in the middle of a very peculiar cultural crossroads. For the first time in the history of the medium, the quality of television programming (in terms of production value, writing and acting) has equaled most of the movies being released in a given year. Television dramas, especially, have been riding an unprecedented wave of success. Moreover, TV series are responsible for elevating American discourse. Whereas 15 years ago, co-workers spent Friday mornings repeating the wittiest lines from Seinfeld, Friends or Mad About You, today they are pontificating daily about the philosophical implications of The Walking Dead or the historical accuracy of Boardwalk Empire.

So, from where or what did this Age of the Television Drama arise? While series like Law & Order have been on for decades, I would argue that The Sopranos was the first show to prove the landscape of television was ripe for programming that was serious, entertaining and, most importantly, extremely well written. Over the course of six seasons, the show, created by David Chase, allowed both its characters and its writing to grow, mature and react to world. During its run (1999-2007), The Sopranos was continuously at the forefront of the cultural zeitgeist because no one had seen anything like it.

Coming into prominence just as The Sopranos was reaching its zenith, Lost became the obsession of many, spawning fan fiction, books and websites dedicated solely to extrapolating clues from the show’s numerous hidden messages. Created by J.J. Abrams, Damon Lindelof and Jeffrey Lieber, Lost perfected the formula of the TV drama and proved that audiences are much smarter and more perceptive than Hollywood studios give them credit for. Lost was also the first show to connect with its viewers via the Internet, giving the sensation of being one step closer to the action.

One of the many reasons audiences are choosing to stay home rather than forking out 15 dollars to go to the movies may be a backlash to Hollywood studios inundating audiences with tripe that is just slightly more intelligent than Honey Boo Boo. There are too few films like Inception, The Social Network and Looper and too many films like the Twilight franchise and John Carter. Audiences that want films to challenge their intellect have to seek them out via film festivals and Netflix since most multiplexes won’t take the risk of showing Children of Men, Take Shelter or The Master. Television networks, on the other hand, have picked up on the fact that people clearly want to be challenged which is why networks like AMC, ABC and HBO have dedicated themselves to providing stimulating series.

Another thorn in the side of the film industry is the popularity of digital video recorders. Only a few years ago, it was unimaginable that you would be able to record television without popping a tape into the VCR. With the advent of TiVo and the resulting boom of DVRs, many viewers are now able to set a recording for their favorite shows and watching at their leisure. Though distributors have tried to compete by releasing films OnDemand even before they arrive in theaters, the cost is still prohibitive whereas your monthly cable bill gives you access to as many shows as you’d like.

It’s inarguable that television dramas are an art form unto themselves; when it’s done right it is mesmerizing. Following in the footsteps of the dramas, television comedies have, over the last several years, also seen a boom of creativity. Louie, Girls, Portlandia, Community. These shows laugh in the face of archetypes and expectations, forging their own paths and writing new rules as they go.

I love that television has evolved into the behemoth it has become. Listening to people argue the merits of Game of Thrones over Fringe provides me with endless hours of entertainment. If you need me, though, I’ll be at a midnight showing of The Room or re-watching The Big Lebowski while drinking a nice sarsaparilla. Mark it eight, dude!