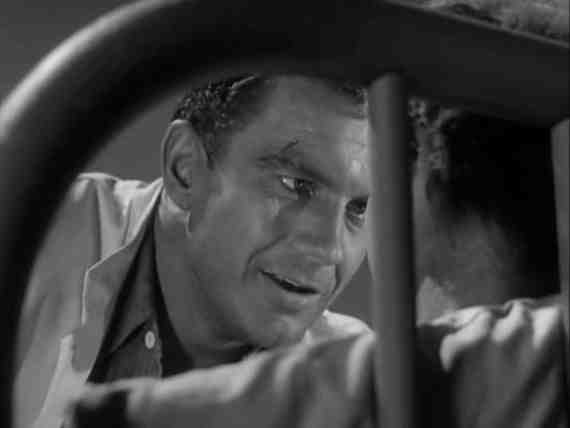 Underworld, U.S.A. is a piercing, unsentimental look at revenge, corruption and organized crime in American cities.

The film was shot during the last days of the Eisenhower Administration when Hollywood’s priggish self-censorship panel, the Production Code Administration (PCA), was still minding the morals of grown-up filmgoers.

Writer-director Samuel Fuller (The Big Red One) drafted a script that sounds, in hindsight, like a cross between American Gangster and Death Wish.

“If you have a story about gangs, you must show how they live and operate and how they use violence to terrify people,” he argued at the time. The same year that One Hundred and One Dalmatians was the nation’s top-grossing movie, Fuller believed that Americans were ready for a realistic film about an adult topic.

Perhaps Americans were, but the prudes governing the industry were not. For more than a year, Fuller cajoled and argued and compromised with the PCA. There were four script revisions and dozens of post-production edits.

Underworld, U.S.A.’s original opening—in which prostitutes joke of starting a union and holding a “stand-up strike”—was deleted, according to author Lisa Dombrowski’s book, The Films of Samuel Fuller: If You Die, I’ll Kill You! Shots of hardcore drug use were edited out, as was a pioneering nude scene. The number of killings was sliced from 18 to five. Overall, according to Dombrowski, more than 20 pages of script were blue-penciled.

In the end, we applaud Fuller for fighting the fight. For one, his efforts—joined by those of directors like Otto Preminger and Michelangelo Antonioni—helped lead to a scrapping of the PCA. It was replaced in 1968 by the ratings system still in use today.

Beyond that, Fuller’s toughness helped him win at least some of the battles. As a result, Underworld, U.S.A. is a taut, gritty film noir that still holds up after 50 years.

You get a sense of its bleakness from the onset, when 14-year-old Tolly Devlin rolls a drunk outside a New Year’s Eve party. He, in turn, is mugged by a tougher teen who bashes Tolly’s eye with a beer bottle. Later that night, Tolly sees his father—a low-level gangster—get beaten to death by four men. It’s a jarring scene, shot in a shadowy alley and accompanied by a dirge-like version of “Auld Lang Syne.”

In the darkness, Tolly can identify just one of the four killers, a mobster named Vic Farrar. He refuses to tell the cops because, he boasts, “I ain’t no fink. I’ll get those punks myself.”

We learn that Tolly has no mom (she died in prison giving birth to him), so the hapless teen is sent to the state orphanage, where he learns the trade of cracking safes and dreams (literally) of avenging his dad.

Fast-forward a decade. Tolly is now an adult, played by Cliff Robertson with all kinds of tough-guy tics. His obsession with evening the score has not waned. When he learns that Farrar is in prison, he deliberately botches a crime so that he gets sentenced to the same institution.

That sets up the second half of Underworld, U.S.A. With Farrar dispatched after blabbing the names of his accomplices (more about that coming up), Tolly finishes his five-year term. By coincidence, the three other men who killed his father have risen to be the underbosses of a ruthless syndicate that controls drugs, prostitution and labor rackets in our unnamed big city. They work for a smarmy capo named Earl Connors (Robert Emhardt), who hides his mob connections by operating behind a legitimate business front (obliquely named National Projects), and by paying off the cops and making large charitable donations.

Connors also spends most of his days swaddling his obese body in a white bathrobe and hanging out by his syndicate’s Olympic-sized swimming pool. “I picked the swimming pool location because I wanted a hollow, clean atmosphere,” Fuller said in the book The Director’s Event: Interviews with Five American Film-Makers. “I had this crime organization hold meetings there, rather than in a pompous office or a pool hall or the dingy little room where gangsters usually hang out. I wanted to get that contrast to what they’re talking about; it’s so vile and low.”

Fuller, a newspaper crime writer at age 17, based his portrayal of the mob on a series of exposé articles in The Saturday Evening Post. The film also gained box-office buzz when its release coincided with a lurid conspiracy trial stemming from the notorious 1957 mob summit in Apalachin, N.Y.

Underworld, U.S.A. is helped by a quirky supporting cast. There is Beatrice Kay as Sandy—Tolly’s surrogate mother and a saloon keeper (in the original script she was a madam suffering from VD) who has a doll fetish because she cannot have children. There is Dolores Dorn as Cuddles, a drug courier for the mob (she was a hooker in the original) who becomes Tolly’s girlfriend as well as his point of access to the bad guys he wants to kill. And there’s Richard Rust as a hit man named Gus, who is as creepy and emotionless as Javier Bardem in No Country for Old Men.

Robertson, who was largely a television actor when this was filmed (check out old episodes of The Twilight Zone), does a great job of creating a single-minded character trying to play every angle to gain his revenge. Smarter than the people around him, Tolly feigns loyalty to both a federal crime commission and the local syndicate to set up his victims.

You won’t feel a lot of sympathy for his character by the end of the film. But you’re not supposed to.

HIT: Fuller did a pioneering job of presenting organized crime as a corporation 13 years before Hyman Roth boasted, “Michael, We’re bigger than U.S. Steel.” Back when Underworld, U.S.A. was made, mobsters were typically presented as slang-talking, unshaven, gun-toting stereotypes.

“I liked working against the clichéd gangster idiom of hoodlums,” he said in The Director’s Event.

MISS: We admire Fuller for trying to show the underbelly of police corruption. But did every single cop have to be either on the take or a bumbling moron?

CASTING CALL: Humphrey Bogart originally bought the rights to the Saturday Evening Post serial, but died of cancer in 1957 before having a chance to film it.

REALITY CHECK: When he gets out of prison, Tolly goes to see Sandy, his mother figure. She asks if he has identified the other guys who killed his father. Tolly picks a newspaper up off the desk and—amazingly—the three men are featured in a front-page story with huge mug shots and a headline screaming how they now run the city’s crime scene.

Now that is one hell of a coincidence.

WHAT THEY WROTE AT THE TIME: “A slick gangster melodrama made to order for filmgoers who prefer screen fare explosive and uncomplicated.”—Variety

PIVOTAL SCENE: Tolly deliberately botches a crime and goes to prison so that he can confront the only killer of his father he was able to identify the night of the murder. He learns that the man—Vic Farrar—is gravely ill. So he angles to get a job in the prison hospital and, alone one night, confronts Farrar on his death bed.

Farrar peers up through delirious eyes. He seems to recognize Tolly, even though he saw him for just a second back when Tolly was 14. I think I know you, Farrar rasps.

Tolly draws in close and whispers: “That’s because I’m a dead ringer for my father, Tom Devlin. Yeah, you beat him to death that night. You and your three pals. Remember, Vic?”

Farrar begins to cry over his old sin. “Don’t worry,” Tolly calmly says, “you will go to heaven if you reveal the names of your partners.” Farrar gasps them out, feels absolved and dies in Tolly’s arms.

A little cheesy, we’ll grant you. But good stuff.

DON’T FAIL TO NOTICE: How that scary mob enforcer, Gus, dons sunglasses every time he’s about to carry out a job.

“That switches on the killer,” explained Fuller. “Afterwards he takes them off and he’s a regular guy—good to his mother, pets his dog.”

VIOLENCE LEVEL: Moderate, because of Fuller’s losing battles with the PCA. In one scene, the corrupt police chief commits suicide when his fealty to the mob is exposed. Originally, Fuller planned a shot of the chief putting his gun in his mouth. The censors wouldn’t allow that. So instead, we see the cop pick up the gun, and then the camera shifts to a wall in his office where the bullet (presumably after passing through his head) ricochets off a photo of the once-proud chief smiling in his uniform.

BET YOU DIDN’T KNOW: The revenge angle of the film is based on the Alexandre Dumas novel The Count of Monte Cristo. There’s a copy of the book on display in Tolly’s apartment.

BEST LINE: “There will always be people like us. As long as we don’t have any records on paper, as long as we run National Projects with legitimate business operations and pay our taxes on legitimate income and donate to charities and run church bazaars, we’ll win the war. We always have.”—Underworld boss Earl Connors.

IF YOU LIKED THIS, YOU’LL LIKE: Pickup on South Street, Fuller’s equally gritty 1953 movie about a subway pickpocket who inadvertently ends up snatching top-secret microfilm from a Russian agent.

BODY COUNT: Five, including a nine-year-old girl who gets run over while riding her bike to silence her father as a witness against the mob.