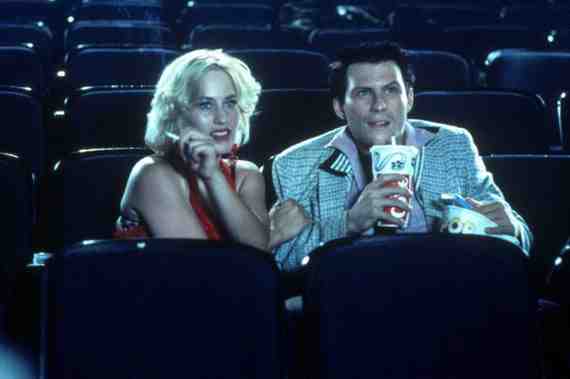 This is an old-fashioned boy-meets-girl love story, filtered (perhaps scrambled is a better word) through the artistic lens of Quentin Tarantino, who wrote the screenplay for director Tony Scott.

Clarence Worley (Christian Slater) is a blue-collar kid from the mean streets of Detroit. He works at a comic book store, loves kung fu movies and occasionally has conversations (usually while he’s taking a piss in the bathroom) with his mentor, Elvis Presley.

Alabama Whitman (Patricia Arquette) is a call girl with a heart of gold, just up from Florida and learning her way around the city. One of her first gigs is as a surprise birthday present for Clarence.

Somewhere between the kung fu triple feature where they meet, the pie that they share at a local diner and the sex in his bed, they fall in love.

From there, the story gets really bizarre.

Tarantino, who actually worked in a comic book/video store, borrows heavily from the SLAM! BANG! POW! imagery of that genre to create a violent buddy movie of sorts. It is sprinkled with memorable performances by a host of actors who were, or were soon to become, members of Hollywood’s A-list.

“Everyone shines . . . but it’s Tarantino’s gutter poetry that detonates True Romance,” wrote Rolling Stone’s Peter Travers in a review praising the film. “This movie is dynamite.”

Samuel L. Jackson, Gary Oldman, Christopher Walken, Dennis Hopper, Brad Pitt, James Gandolfini and Val Kilmer (barely seen as the “mentor” we know is Elvis) all make appearances. Some are on screen longer than others, but none goes more than a scene or two.

These are more than cameo roles, though. In some ways, the movie is a series of vignettes, each of which could stand alone as a short film worth watching. We might even argue that the pieces are better than the whole.

There’s Jackson as Big Don, going on at length and in detail about how he likes oral sex with women. His sexual monologue ends abruptly when he’s blown away by a shotgun-wielding drug kingpin named Drexl (Gary Oldman). We’re never quite clear why Big Don has drawn Drexl’s ire, but no matter. That’s the way Drexl rolls.

The dreadlocked kingpin—“He’s white, but he thinks he’s black,” Alabama tells Clarence—is Alabama’s pimp. Needless to say, he is less than pleased with her decision to leave his employ.

Clarence’s confrontation with Drexl is another comic book-inspired scene of mayhem and violence sprinkled with tough guy dialogue and the standard Tarantino movie references.

“Ya’ know what we got here?” Drexl asks his associate Marty after Clarence shows up at the brothel. “Motherfuckin’ Charles Bronson. Mr. Majestyk.”

Clarence has brought along his gun. And, buoyed by words of encouragement from his “mentor” (“Every pimp in the world gets shot. Two in the back of the fuckin’ head. Cops’d throw a party, man.”), he has no intention of backing down.

A violent fight scene ends with Drexl and Marty dead and a badly beaten Clarence leaving the brothel with what he thinks is a suitcase packed with Alabama’s belongings.

From there, True Romance becomes a twisted road movie with Clarence and Alabama on the run from the mobsters Drexl worked for. Not surprisingly, those wiseguys want their drugs back.

Walken, as Sicilian mobster Vincenzo Coccotti, has a great scene with Dennis Hopper, who plays Clarence’s father, Clifford. The confrontation, inside a trailer in a freight yard where Clifford lives and works as a security guard, is a movie within a movie. Both Walken and Hopper shine in a scene that became one of the signature moments in True Romance.

From there, the action shifts to Hollywood, where Clarence hopes to reconnect with his friend Dick Ritchie (Michael Rapaport), who is trying to make it as an actor. Clarence figures Dick can help him unload the half-million dollars worth of coke, which he’s willing to sell for the bargain basement price of $200,000.

Gandolfini is Virgil, one of the mob hit men sent to Hollywood to track down Clarence, Alabama and the cocaine. His brutal fight scene with Alabama—“You got a lot of heart, kid,” he tells her while smashing her face and literally tossing her around a motel room—ends with another comic book-like blast (literally) of violence involving a can of hair spray and a cigarette lighter.

Brad Pitt—as a stoner who never really understands what’s going on—helps direct traffic during the manhunt, as assorted characters show up looking for the love pair. Pitt’s character, Floyd, is high in each scene and never leaves the couch of the rundown apartment he shares with Ritchie.

Drugs, the movie industry and heavily-armed cops and gangsters all converge for a final confrontation that ends with bodies strewn about a swank hotel room.

HIT: The frenetic action never stops. This is a movie where you never get a chance to catch your breath. One crazy scene spins into another. There’s a roller-coaster ride in Hollywood that’s emblematic of the entire movie. It’s up and down and going in circles. Fans will enjoy the ride.

MISS: This is hinted at several times by characters involved in the drug deal, but anyone attempting to sell $500,000 worth of cocaine for $200,000 is going to be met with skepticism. The drug underworld is built around fear and paranoia. This was a deal too good to be true, and it is one of the major flaws in an admittedly entertaining, but flawed, plot.

WHAT THEY WROTE AT THE TIME: “True Romance aims to be a Bonnie and Clyde for the ’90s, but its aim isn’t true—it’s just Bonnie and Clyde for an MTV generation with a short attention span and an even shorter emotional range. Despite its noir references and evocations, this slick film, directed by Tony Scott from Quentin Tarantino’s script, is a preposterously bloody mess, as is the plot.”—Richard Harrington, Washington Post

REPEATED WATCHING QUOTIENT: The best way to revisit this movie is in pieces. Any one of a dozen scenes involving the stellar supporting cast is worth viewing at any time. Small doses, in fact, may be more fun.

BEST LINE: “I’m the anti-Christ. You got me in a vendetta kind of mood,” Coccotti (Walken) says to Clifford Worley (Hopper) as their confrontation in the trailer begins.

Worley’s responses, leading to an “eggplant” reference, are also classics, but to repeat them here would spoil their effect.

DON’T FAIL TO NOTICE: In typical Tarantino fashion, the word “fuck” and its derivatives are used more than 200 times.

VIOLENCE LEVEL: Filled with bloody and brutal fight scenes and characters with swollen faces, blackened eyes and lots of other damaged body parts.

BODY COUNT: Twenty-four, most piling up during the climatic shootout in the hotel room.

On Being A Movie Geek in the Age of the Television Drama
Movie Review: Promised Land