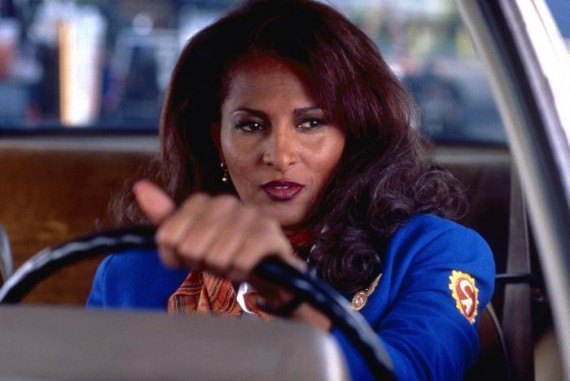 Film fans and critics wondered where Quentin Tarantino would go after his highly praised and wildly successful Pulp Fiction, a 1994 underworld film that some thought established a new form of crime cinema.

Whether by design or because it was the safe move, Tarantino chose a more standard form of storytelling with Jackie Brown. It’s a good movie, but certainly not in the same league with Tarantino’s two preceding films, Pulp Fiction and Reservoir Dogs (1992).

This is more a character study built around an intriguing heist-con-double-cross-triple-cross. There’s plenty of the trademark Tarantino asides, quips and street corner philosophy. But sometimes all the talk gets in the way of the narrative. And sometimes you get the feeling that Tarantino is just trying to show how clever he is.

The cast is major league. Pam Grier reestablished her career playing the title character and Robert Forster got an Academy Award nomination for Best Supporting Actor for his role as Max Cherry, the soft-spoken and world-weary bail bondsman.

But it is Samuel L. Jackson, over-the-top as the gunrunner and principal bad guy Ordell Robbie, who steals this picture. His character can’t utter a sentence without incorporating the word “nigger” or “nigga,” but he says it in such a matter-of-fact manner that it hardly sounds offensive.

His take on life is built around making money and eliminating anyone who might get in the way of his enjoying it. He’s got a long ponytail, a narrowly braided Chinese-like goatee and an attitude. He’s also got a half-million dollars in cash stashed in Mexico that he wants Jackie Brown, a stewardess on a small airline, to bring back to him.

It’s Jackson’s Robbie who has the most Tarantino-esque lines, whether it’s complaining about the customers and the advertising in the illegal gun dealing business or dismissing the violence and betrayal that are routinely part of his life.

“The AK-47, the very best that there is,” he says as he and his longtime friend Louis Gara (Robert De Niro), just out of prison after a four-year stint, watch a video called Chicks Who Love Guns. “When you absolutely, positively got to kill every motherfucker in the room, accept no substitutes.”

Gara is both bewildered and impressed with the video, Robbie’s spiel and, it seems, life in general. Four years behind bars have taken a lot out of him. “What happened to you, man? You used to be beautiful.” Robbie cries in one pivotal scene with his former partner in crime.

De Niro does a good job in a minor role. Gara is what Johnny Boy from Mean Streets would have been like had he lived to be 50 and spent a big chunk of his adult life in prison.

When Robbie shows Gara the body of a former associate he has recently killed and stuffed in the trunk of his car, Gara asks, “Who’s that?”

“An employee I had to let go,” says Robbie.

Robbie also has the perfect take on his surfer-girl mistress Melanie (Bridget Fonda) who Gara also ends up in bed with.

Trust, or the lack thereof, is a big part of the story here. While Robbie has the guns and the money, it’s Jackie Brown who, in the vernacular of the movie, has the balls. She’s been running cash up from Mexico to Robbie, but after getting jammed up in an investigation in which he is the primary target, she manages to turn the tables on the bad guys, the good guys and the hapless women caught in the middle.

Several of them end up dead along the way, although not at Jackie’s hand.

The only time she pulls a gun is when she confronts Robbie in her apartment, in the dark. He has come, she knows, to kill her because, like Beaumont, he believes she is cooperating with the authorities.

After Robbie has backed her into a corner and is holding her by the neck, he pauses.

“Is that what I think it is?” he says as the two stand face-to-face in the dark apartment room.

“What do you think it is?” Jackie asks.

“I think it’s a gun pressed up against my dick,” Robbie says.

Jackie manages to convince Robbie that she is playing the authorities, pretending to cooperate, when in fact, what she wants to do is help him get his half-million dollars out of Mexico. She’ll do it, she says, for $100,000.

That sets the plot in motion and, like a dealer in a game of three-card monte, Jackie Brown is always two steps ahead of everyone who thinks they are following the cards.

Cherry, of course, has no stake in the game, but because he is falling in love with the principal player, agrees to help her pull off the ultimate scam. When she assures him the money won’t be missed, his reply captures the tired cynicism that defines his character.

“Half a million dollars will always be missed,” he says.

There’s a quasi-happy ending, but only Jackie gets to ride off into the sunset.

HIT: The music is a big part of setting the mood, whether it’s a love song by the Delfonics or Bobby Womack’s “Across 110th Street.” These are echoes of the blaxploitation films that Grier starred in earlier in her career, but this movie heads her in a different, more entertaining and sophisticated direction.

MISS: Chris Tucker’s brief appearance as the doomed Beaumont is more cartoon than character. And while there is a cartoonish nature to parts of what Tarantino does in almost every film (Kill Bill, anyone?), Tucker overplays it here.

BET YOU DIDN’T KNOW: Tarantino based the movie on Elmore Leonard’s novel Rum Punch, but changed the locale from Florida to Southern California and made the heroine an African-American woman. Both changes were fine by Leonard, who is not always happy about the way his novels are translated to movies. Of Jackie Brown, he told Time magazine that Tarantino “surprised me. I thought he might be all over the place; but he stayed very, very close to the plot and used quite a bit of the dialogue.”

DON’T FAIL TO NOTICE: The closing credits include “special thanks” to “Bert D’Angelo’s Daughter.” This is a reference to Mira Sorvino, Tarantino’s girlfriend at the time. She is the daughter of actor Paul Sorvino who in the 1970s starred in a TV detective series in which he played Bert D’Angelo.

This is either the kind of hokey, insider stuff that Tarantino fans love or an example of the self-indulgent name dropping that reinforces critics’ opinion of Tarantino as an obnoxious blowhard.

Take your pick. We’re staying on the sidelines on that one.

WHAT THEY WROTE AT THE TIME: “Jackie Brown has the makings of another, chattier Get Shorty with an added homage to Pam Grier, the Annie Oakley of 1970’s blaxploitation. That could well have been enough, since Mr. Tarantino shows such obvious affection for his leading lady and for the cheerful, greedy lowlife in Mr. Leonard’s stories. But for all its enthusiasm, this film isn’t sharp enough to afford all the time it wastes on small talk, long drives, trips to the mall and favorite songs played on car radios. And although Ms. Grier makes an enjoyable comeback, she isn’t an actress well served by quiet stretches of doing nothing before the camera.”—Janet Maslin, New York Times

REPEATED WATCHING QUOTIENT: This is a highly entertaining film and almost any scene with Samuel L. Jackson is worth revisiting.

PIVOTAL SCENE: The cash transfer in the women’s dressing room. It’s played three times from three different perspectives and sets the stage for the big-time violence that leads to the film’s conclusion.

CASTING CALL: Michael Keaton plays the same ATF agent, Ray Nicolette, in another Elmore Leonard novel adapted for the screen, Out of Sight (1998). In that movie, he gets to flirt with Jennifer Lopez instead of Pam Grier. Both seem like fine options to us.

VIOLENCE LEVEL: Typical, but not over the top, for a movie dealing with gunrunners and drug dealers.

BEST LINE: This movie is loaded with them, in no small part because of the aforementioned loyalty to the dialogue in Elmore Leonard’s book. Leonard has one of the best ears in the business when it comes to crime writing and this translates easily to film.

Here are two to consider:

“My ass may be dumb, but I ain’t no dumbass,” says Robbie as he and Cherry discuss the ebb and flow of the dangerous game they’re playing.

“You know, a good cop will never let you know he knows you’re full of shit,” Cherry tells Jackie as she outlines her plan to double-cross the agents who want her to cooperate.

IF YOU LIKED THIS, YOU’LL LIKE: Almost any of the other movies based on the novels of Elmore Leonard, including the aforementioned Out of Sight, Pronto (1997) and Killshot (2008).