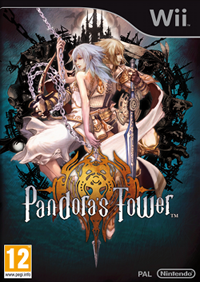 Lazy and Uninspired, ‘Pandora’s Tower’ Is a Wasted Opportunity

Japan’s video game industry is stagnating. Not in terms of revenue, or even hardware, but in terms of creativity. There are very few games that make it Stateside which are visibly discernible from Japan’s previous offerings — tried and tested methods being recycled until they are utterly devoid of life. What was once iconic – big hair, slender waists and massive…uh…assets – has become a laughable stereotype as developers refuse to push forward and innovate with their designs. Japan used to be a trendsetter in terms of game design, and it’s a shame to see things descend into mere mimicry of what has already been. In terms of aesthetics, Pandora’s Tower suffers deeply from this refusal to move on.

The game features three main characters, and if you’ve ever played a JRPG before you’ll have already met them. The silent, bone-headed protagonist Aeron takes the reigns as your avatar, his appearance lifted almost entirely from Final Fantasy VII’s Cloud, the iconic blonde locks and vacant expression all present and accounted for. His lady-friend Elena is suitably waif-like, disturbingly skinny and so dependent on her male counterpart it’s hard as a woman to not feel insulted. Finally, if you guessed they’d be joined by a creepy old lady with a skeleton sitting on her back, you’d be right.

These three reside in Elyria, a Kingdom on the continent of Imperia, and they are at war with neighbouring Kingdom Athos following several hundred years of peacetime. Following an attack at the Harvest Festival, at which she had been invited to sing, Elena finds herself cursed to transform into a hideous beast. Aeron, an Athos soldier in love with and indebted to Elena for saving his life some years prior, allows Mavda to guide them to the Scar, a chasm in the land held together by giant chains, upon which rest the Thirteen Towers. These Towers hold the Scar together and prevent it from opening further and destroying the entire continent. They take refuge in an Observatory, which serves as your home base and overlooks the Towers. Mavda gives Aeron an Oraclos Chain and instructs him to topple the masters of the Thirteen Towers if he wants to save Elena from her curse.

Once the ball gets rolling it’s clear that of the three main characters Elena has the most to offer. Her curse will take hold of her unless she consumes raw Beast flesh salvaged from Aeron’s conquered foes, and her reliance on Aeron is the only thing holding her back. Intelligent and creative — while you‘re away adventuring she translates ancient texts and puts her best efforts into making the Observatory a homely place. In my mind, I imagined what she could have achieved if she’d picked up a sword and plundered the Towers herself. A game where you play a female protagonist who feasts on the flesh of her dead enemies after garrotting them to death with a magical chain sounds like something I’d actually want to play. Instead Elena is relegated to cut scene and conversation fodder; a few visceral shots of her eating the raw meat you’ve salvaged and then you’re already trudging back to the next tower to defeat the next Master, leaving her behind once more.

These scenes will either put you off your dinner or worse, make you feel hungry.

A significant chunk of the gameplay is combat based, and it is some of the best combat to ever grace the Wii. Versatile and original, it employs the Wiimote in a manner which does not feel forced or gimmicky. Armed both with your chain and a standard sword, the player can point to aim and throw the chain with the remote before tautening the length for extra damage as you tear away at a foe’s flesh with a quick flick of the wrist. As the battles intensify, flailing of the remote can ensue, but this approach is ineffective, deliberately forcing the player to make calculated and strategically effective choices. This is most apparent in the Master fights at the conclusion of each Tower, each encounter requiring more complex tactics. Difficulty spikes are frequent and unforgiving, with brains rather than brawn prevailing in nearly every situation. Anyone choosing to use their sword to hack away at enemies is in for a bad time, as Aeron is outmatched at nearly every turn.

The chain transcends combat, being a useful tool for traversing the Towers and solving their many puzzles. Scaling walls and leaping death drops are its two key functions, but its ability to position and throw objects into place allow for more complex manoeuvring. Frustratingly, operating the chain can prove slow at times, something of an inconvenience when you are required to scale the Towers with speed. Elena’s curse is tracked in real time, and you must return to her periodically to feed her Beast flesh in order to buy yourself more minutes in the Tower. Should she transform entirely, it’s Game Over, so it’s in your interest to pay her frequent visits and keep one eye on the timer gauge at all times. You cannot agonise over puzzles or allow any fight to drag on for longer than necessary – operating on the defensive is a sure fire way to waste precious moments. So when the clock is ticking, it is important that your tools can keep up with you – and occasionally the chain just can’t.

While competent, streamlined level design and semi-rare drop items which can transport you instantaneously make returning to Elena less of a chore than it might have been, Aeron moves without urgency. Each action he takes must complete before he responds to your next command, and with the timer ticking, sitting through another botched chain animation begins to grate the nerves. His feet are slippery, toppling over edges with the tiniest nudge and hanging there for several seconds before clambering back up again – sometimes this will happen repeatedly, so sensitive and inaccurate are the directional controls. While in combat he is graceful and effective, moving throughout the Towers, Aeron is ungainly and often plain stupid.

A very interesting weapon wielded by a very dull protagonist.

The ideals behind Pandora’s Tower are built on binaries which have been crumbling beneath the feet of modern critical theory for years now, so it’s no surprise that the game feels dated and almost condescending. Graphically lacklustre and generic , there is dissonance between the game’s ambition and its execution. Thematically underpinned as it is by the Ying and Yang of the universe, there are references to binary oppositions wherever you turn. Your chain is woven of “dark and light” as well as “masculine and feminine”, and Elena’s consumption of meat is a slap in the face to her religiously borne vegetarianism. However, rather than giving any real commentary on these oppositions, Pandora’s Tower instead descends into textbook storytelling and bland artistic choices.

“Bland artistic choices” is my very polite way of saying that this game is ugly. Extremely ugly. Many developers have successfully squeezed beauty from the Wii’s limited graphical capabilities, but Pandora’s Tower is just plain hideous. A drab colour palette combined with an inappropriate art style results in a blotchy, pixelated mess that belongs in the 1990s PlayStation years. Improved rendering is used for cut scenes and character close-ups, but when the majority of your time is spent in third person environments it’s hard to believe any effort went into the game’s appearance. The level design itself is wonderful, managing to convey size and complexity while remaining navigable and streamlined. It’s a shame that they then slapped a layer of ugly on top of it. Enemies suffer a similar fate; aside from the Tower Masters, which have been lovingly crafted, every mob is a faceless mess, each one the same miserable shade of grey with no real discernible features. Given that importance is placed on these creatures – after all, you need their flesh to keep Elena alive – it seems strange that they are so anonymous.

I couldn’t find any screen caps of the environments that looked nice, so here’s some concept art instead.

It is entirely possible that this apparent oversight is actually a deliberate part of the design; the game’s focus is almost entirely on making you care for Elena, rather than resenting her for pulling you away from your quest. When your enemies lack personality and your surroundings are visually offensive it’s something of a relief to return to the Observatory and spend some time talking to your lovingly rendered girlfriend. While the dialogue is hammy, her voice acting feels sincere and her excitement when you bring her gifts or even just talk to her is touching. In order to get the game’s best ending Elena and Aeron must have established a strong bond, indicated by a metre running the left hand side of the screen whenever you speak with her. The game’s focus on Elena draws any attention from Aeron, leaving him a mere vessel for the player to inhabit.

Pandora’s Tower is a conflicted game. On the one hand, it boasts an original premise, it takes a stab at being thematically deep, and it has some pretty gripping gameplay. It’s let down by its aesthetic shortcomings, by its adherence to the generic standards set by years of Final Fantasy sequels, and by technical flaws which should not be present in a game which relies on the player being able to move with speed. It fails to address in any meaningful capacity the motifs it draws upon, even though the main plot is drip-fed to the player as the game progresses. This gave the writers an opportunity to avoid over-burdening the player with philosophy and instead introduce it subtly, an opportunity which they sadly missed. Pandora’s Tower had a huge amount of potential, but a few poor artistic decisions undermined its best efforts.

I am currently studying for a BSc in Computer Games Production at Lincoln University, UK, before progressing onto a Masters in Computing. My key interests are serious games and game philosophy.

I am currently studying for a BSc in Computer Games Production at Lincoln University, UK, before progressing onto a Masters in Computing. My key interests are serious games and game philosophy.

A Throne of Games – Volume 1 – A Historie of Consoleflict
The Finale Solution – Three of Them, Actually.