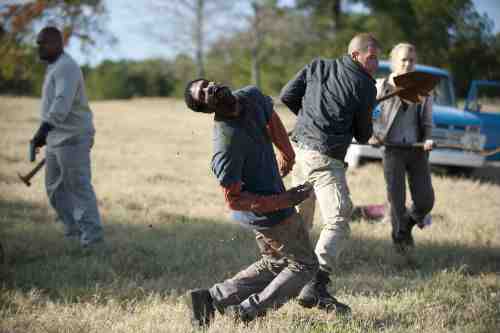 Things are finally happening! In the opening of this week’s Walking Dead, our cast of survivors comb the woods and fields surrounding Hershel’s farm as Rick eulogizes Dale. As Andrea, T-Dog, and Shane brutally, viciously smash and crush the head of a walker, Rick laments the late Dale’s passion for the human race. It’s patently uncomfortable.

Meanwhile, the whole crew is moving into Hershel’s farmhouse. Although Glenn received Hershel’s blessing, he still avoids Maggie’s bedroom, preferring instead to put his things in the corner of the dining room. While Glenn is fast becoming my favorite character, his reticence toward a potentially great relationship in the midst of the freaking zombie apocalypse is beginning to wear.

In the middle of Dale’s funeral, Daryl, ever the mountain man, seems to be shooting somewhat longing looks at Carol. In the books, Dale and Andrea formed a sweet May-December romance. Dale’s insecurity and belief that he was too old, not worthy of Andrea’s beauty and toughness, was a very important and poignant aspect of this particular post-apocalyptic tale. When your entire world crashes down around you, you discover that you’re able to love with fewer boundaries, lust for life in all its forms. I’d be thrilled if the writers chose to transpose this relationship onto Carol and Daryl – both have lost someone important, their age difference is enough to be interesting, and they seem to both have developed a thick outer skin whose penetration would make their character development more interesting. (Hint, hint, writers.)

Rick has decided cutting Randall loose is the best thing for everyone, but he’s aware that Shane has decided otherwise. Shane is “turning over a new leaf,” Rick tells Hershel. He’s not a bad guy! Just confused. The solution here, of course, is to ask Andrea to babysit Shane and make sure things on the farm don’t go straight to hell while the menfolk are gone taking Randall off the farm. Andrea, who’s been drinking the Shane Kool-aid for some weeks now, is unable to commit to babysitting. Luckily, before Rick and Daryl can take Randall, Shane steps in.

“Divide and conquer” is Shane’s mantra this episode. When Carl approaches him to ask if Dale’s death was Carl’s fault (Carl’s knife visible in exactly the same place on his belt as is Shane’s unnecessarily displayed pistol), Shane tells Carl, why no! Of course I won’t tell your parents. He then does, of course. Rick needs to know Carl’s wandering off by himself, getting into trouble. The problem is the way Shane decides to inform Rick. Rick has indeed been neglectful – as has Lori – and Carl is getting way out of control.

But Shane uses Rick’s apparent shortcoming as a weapon, a way to play the one-up game with Rick; this is dangerous ground on which to tread. Rick, of course, takes his old friend’s advice and approaches his son. He has the equivalent of the “death” talk with Carl as the two perch in the hayloft. It’s pleasant to see the two of them interacting; it feels like it’s been awhile that we’ve seen Rick truly playing the father to his errant son.

Shane unchains Randall and convinces the poor kid Shane wants to be a part of his group – “I’m done with these people, man,” says Shane with his crazy eyes. He’s really, truly losing it, slapping himself, wild-eyed, pointing a gun. He leads Randall into the woods, and murders him (interestingly) off-camera. A snap of bone, a brief cry, and Randall is no more…for now. Shane then slams himself into a tree and returns to the group to tell them all Randall attacked him and is loose in the woods with Shane’s gone. Divide and conquer, indeed.

Randall, as it turns out, is only sort of “dead-ish.” He pops back up and nearly gets the better of Daryl and Glenn. Fortunately for everyone, Daryl’s hunting experience and quick wits save the day. Unfortunately for everyone, Randall had no bites, but he’s still a zombie. This – now this is big. It’s big, problematic, and scary. This means the virus, the one that causes people to come back to life, is not transmitted by bite. In the original (American) Romero zombie lore, it was radiation that brought people back from the dead. Apparently this (or something like it) is what we’re dealing with here.

As Daryl and Glenn make this life-changing discovery, Shane nearly succeeds in his divide-and-conquer strategy. Rick, though, understands perfectly well that Shane plans to execute him. Have you ever danced with the devil in the pale moonlight? These two men waltz around each other’s pain, jealousy, and residual anger beneath an enormous moon. Spring peepers and crickets, the sonata of country summer, juxtapose uncomfortably with discussions of murder. Just as Rick manages to talk Shane down, Rick thrusts his knife into his old friend’s chest. Little does he know, that won’t keep him dead.

Carl, as it turns out, is the one to end Shane for good. This poor kid.

As an aside, one good thing I’ll say about Walking Dead is that they didn’t kill the back guy first. Unfortunately, T-Dog hasn’t had a real line in ages and last night’s most important utterance from him was “Oh hell no!” I mean, I know this show is set in the South, but seriously?

There’s only one episode left, and the undead hordes, the ones our cast of plucky survivors thought they’d already killed twice, are shambling in from all sides. This season finale has the potential to get us back up and running – and according to the books, the next phase should be a nailbiting, brilliant piece of work if done correctly. How do you think it’ll all end?

Julia Rhodes graduated from Indiana University with a degree in Communication and Culture. She’s always been passionate about movies and media, and is particularly fond of horror and feminist film theory, but has a soft spot for teen romances and black comedies. She also loves animals and vegetarian cooking; who says horror geeks aren’t compassionate and gentle? Bank Routing Numbers

Julia Rhodes graduated from Indiana University with a degree in Communication and Culture. She's always been passionate about movies and media, and is particularly fond of horror and feminist film theory, but has a soft spot for teen romances and black comedies. She also loves animals and vegetarian cooking; who says horror geeks aren't compassionate and gentle? Bank Routing Numbers