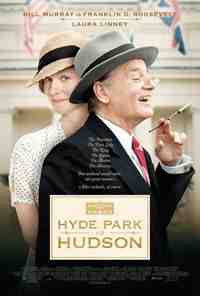 A meandering and inept story of…something.

For a film critic, few things are more frustrating than shoddy storytelling. Poor casting, bad acting or excessive special effects (and sometimes all three) are something we have come to accept, and expect, from the majority of movies released in a given year. But a weak script cannot be excused for any reason. After all, a film whose script is riddled with plot holes or plagued by narrative impotence shouldn’t exist in the first place. Even this summer’s box office stillborn John Carter had a story which, though pedestrian, had a clearly delineated path with intrinsic coherence. Say what you will about the overlong and bloated space adventure, it at least adheres to the three-act structure.

Hyde Park on Hudson, however, apparently has no need to either employ standard screenwriting structure or the desire to subvert them for a specific purpose. Screenwriter Richard Nelson apparently only moonlights in film; his day job is as a playwright, a fact that screams from the multitudinous two-person conversations that are littered throughout the film. Despite the fact that films are allowed to have numerous locations, Nelson opts to restrict Hyde Park’s action to one main set which, after the film’s seemingly interminable run time of 95 minutes, feels more smothering than being buried in a dumpster full of Snuggies.

Overlooking (or ignoring) any type of introduction, the film starts in the middle of a story which concerns President Franklin Delano Roosevelt (Bill Murray) and his encounter with England’s royalty in the summer of 1939. In an historic trip, King George (Samuel West) and Queen Elizabeth (Olivia Colman) visit America just as it becomes clear that England will be unable to avoid war with Germany. The King has come to ask for America’s assistance and support, knowing neither he nor his country is strong enough to face Hitler alone. It is never clear why Roosevelt invites the King and Queen, except maybe to gain two more pairs of eyes to admire his prized stamp collection.

The film is told from the perspective of Daisy (Laura Linney), Roosevelt’s fifth or sixth cousin (depending on how you’re counting) who is asked to keep the president entertained amidst all his political battles and thunderstorms. As occasionally happens in very wealthy families, Daisy and Roosevelt enter into a romantic relationship despite their relation to one another. FDR is jovial and inquisitive, Daisy is quiet and timid. What else can be expected?

We’re also privy to the stressed and tense marriage of George and Elizabeth who perfectly exemplify the elitism that is inherent in British royalty. With more rules for appropriate behavior than anyone could count, FDR and his family do their best to handle the royal couple in the manner they would treat a porcelain doll. The private moments we witness between the King and Queen seem to belong in a film of their own since here they are jammed between other scenes and never fully erupt or reach a satisfying resolution. Like so much of Hyde Park on Hudson, the spats between the King and Queen are hollow and unconvincing.

Director Roger Michell is obviously in love with the story and the characters, but it is hard to discern why. Michell treats his material with a sort of reverence too honorable for the drivel which it is. His staging is an unabashed rip off of Joe Wright’s much more elegant style (see Atonement, Pride and Prejudice) and the intrusive camera placement is supposed to resemble Terrence Malick’s floating camera technique but instead just brings us closer to the horrid characters that parade in front of us for an hour and a half.

While it is fun to see Bill Murray playing a character such as this, his FDR has the trustworthiness and charm of the proverbial snake oil salesman. Murray is clearly enjoying himself which may be the film’s only redeeming quality. Here, Murray is actually trying to act instead of coasting on his name. The only other cast member worth mentioning is West as the King a.k.a. Bertie. His performance is serviceable at best, but the fact that he is able to distinguish his portrayal of King George from that of Colin Firth’s Academy Award-winning performance of only a few years ago is no small feat. For that, he deserves credit.

So, is the film about FDR’s encounter with the king, his incestuous relationship or the very comical cultural differences between the United States and Great Britain? Nelson spends so much time delighting in the fact that the Brits don’t know what a hot dog is that he may have been satisfied calling the film Oscar Meyer on Bun. The film has the entertainment value of folding laundry and the historical significance of Wham!’s first single, either of which would be more worthy of your time.