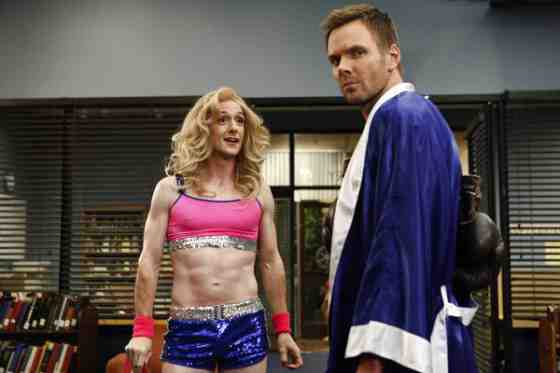 Late last night as I was drifting off to sleep, I came to a startling realization. While replaying the most recent episode of Community (“Paranormal Parentage”) in my mind, it dawned on me that I didn’t laugh once. I smirked a few times, sure, like when Jeff describes Pierce’s house (“It looks like David Lee Roth threw up Miami Vice.”), but I didn’t release a single chuckle. I’ve been watching Community since the very beginning and have laughed during every single episode, sometimes loud enough to wake my dogs up from a dead sleep. So, to not laugh at an episode of Community is a very strange and unsettling experience for me.

Airing on Valentine’s Day, “Paranormal Parentage” was the Halloween episode that has become a staple of every season of Community (and every TV comedy, for that matter). Previous episodes like “Epidemiology” and “Horror Fiction in Seven Spooky Steps” have lampooned genre films and provided some of the series’ most memorable moments, “Paranormal Parentage” was just…boring. The story was subpar and the meta-references were practically winking at themselves. Is it possible to be nostalgic for something that aired less than a year ago?

The whole concept of the episode seems forced from the start. The study group is planning to attend a Halloween party thrown by Vicky (I miss Vicky!) and their costumes are, well, lame. In previous years, we’ve gotten Abed as the creature from Alien and Troy as a sexy Dracula. Here we have Jeff as a boxer, Annie as the girl from The Ring (she was confused about what Jeff meant by “ring girl”), Troy and Abed as Calvin and Hobbes (okay, that was cute), Shirley as Princess Leia and Britta as a giant ham. Maybe that’s supposed to be funny because she’s a vegetarian? Thankfully, Dean Pelton saves the day and swoops in as the ring girl Jeff was originally looking for.

You can hear the bell ringing “dean, dean, dean.”

Pierce, they realize, is missing because he has locked himself in the panic room of his mansion. With no other choice but to all go together or not go at all, the group goes to Pierce’s house to rescue him. The house looks like a 1980s disco exploded and then rapidly fell into disrepair. Conveniently, Troy had to memorize an obscene amount of information about the house when he lived there for few months. This information comes in handy throughout the very contrived plot.

Pierce tells them via videophone that he accidentally locked the door when he thought he saw his dead father. The code, he informs them, is written in a red notebook somewhere in the house. The group splits up Clue-style to search the cobweb-infested bachelor pad. Having plenty of daddy issues of his own (and the fact he kind of killed Pierce’s father), Jeff is not too keen on the idea of spending any time at all in the house. Britta tries to therapize him as they search, but he’s as impenetrable as ever.

Meanwhile, Annie and Abed get separated when Abed discovers a secret passageway into Pierce’s video surveillance command center. Troy and Shirley are pretty sure they’re walking in circles when they discover Pierce’s “special gym” that has an indoor swing and lots of leather masks. Shirley quickly escorts them out fearing for Troy’s innocence. That is another strange component of this episode: Shirley being protective of Troy. Since Troy and Britta are officially dating and since Britta is an, let’s say, experienced woman, Shirley thinks Troy is going to be violated by Britta.

Spooky stuff starts to happen (shadowy figures, rattling doorknobs, a wall that looks like someone is trying to escape from within it), but it turns out that Pierce is behind the whole thing. He lured the group up to his house to play an elaborate prank on them for not inviting him to Vicky’s party. Really, this again? When Abed shows everyone video footage he found of all Pierce’s hijinks, Pierce realizes that someone else really is in the house. That person is Gilbert (Giancarlo Esposito), Pierce’s half-brother who worked as their father’s assistant until he died. Gilbert has been living in the house for six weeks because he isn’t handling the death of their father very well. In a moment of selflessness, Pierce invites Gilbert to officially move in, claiming that he could use a roommate.

Upon waking up this morning, I hoped the entire thing was a terrible dream. I checked my DVR and, sadly, the whole horrible episode actually happened. I was so excited for Community to come back and now that it has, I’m starting to wish it had just been cancelled after the third season so it could go out on top like the UK version of The Office.