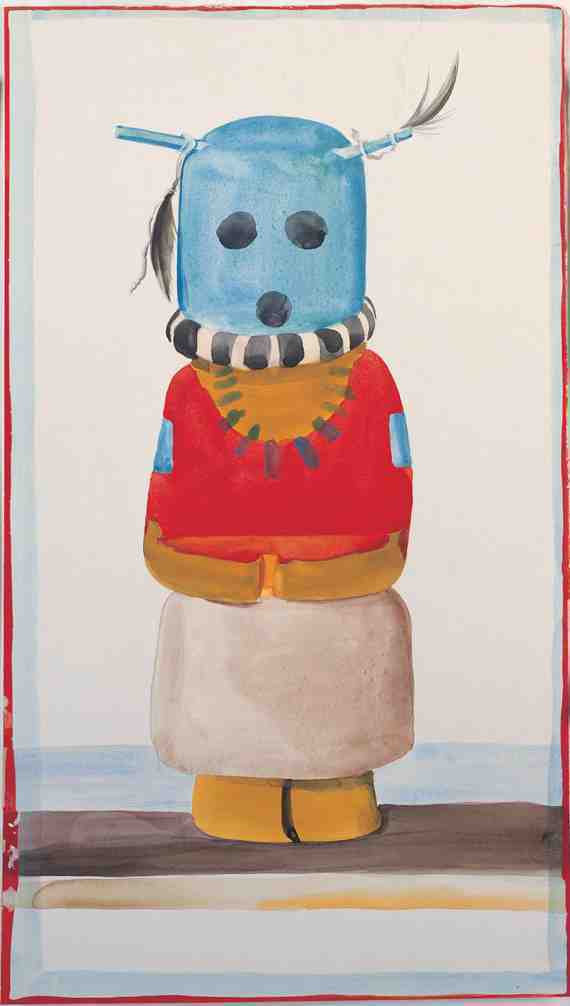 A small oil painting called A Man from the Desert hangs in the Denver Art Museum’s version of Georgia O’Keeffe in New Mexico. The “man” in question is a wooden katsina (sometimes spelled katchina or kachina, painted black, white, red, yellow, blue, and green by its Hopi maker. The katsina stands in a red desert landscape in front of an intensely blue sky. The scale of the figure is difficult to gage. In all likelihood it, like the figures of other katsinam (the Hopi plural) on display nearby, is no more than several inches high. But it is a monumental figure nonetheless, dominating the simplified and abstracted forms of a landscape that could itself be either vast or minute.

O’Keeffe famously spoke of how the arid climate of her beloved New Mexico made “the faraway nearby”; there is no atmospheric haze to veil the distance, and the geology of the landforms lies open to the eye. A Man from the Desert plays with the difficulty of judging the relative size of things in a place of such relentless clarity. (Elsewhere in the exhibit is a small pocket-sized sketchbook; on one half of one page, O’Keeffe has sketched a landscape of hill and plain that nevertheless feels vast). A Man from the Desert also brings together two key motifs of this exhibit: the New Mexican landscape, and the Hopi katsinam whose bold, stylized forms and colors fascinated O’Keeffe.

The full title of the exhibit, at least in the Denver version, is Georgia O’Keeffe in New Mexico: Architecture, Katsinam, and the Land. (The show hangs in Denver until April 28, 2013, and will then move on to summer and autumn runs at the Georgia O’Keeffe Museum in Santa Fe and the Heard Museum in Phoenix). The show includes almost none of O’Keeffe’s familiar flower paintings and focuses instead on the artist’s engagement with the places and artifacts of her adopted home.

Of course, O’Keeffe’s images of the region’s arid landscapes and adobe architecture are almost as well known as her flowers, and they are well represented here. Far more rarely seen are the many paintings and sketches of katsinam which, in Denver, are supplemented by a generous display of actual katsina figures, on loan from the museum’s renowned Native American collection, along with works by contemporary Hopi artists incorporating katsina imagery.

It can be hard for the contemporary viewer to come to O’Keeffe’s work with a fresh eye. The flower paintings come with their own baggage, but her work from New Mexico poses challenges as well. So many amateur painters have painted the swelling volumes of the church of San Francisco de Asis at Ranchos de Taos, and so many tourists have admired the blue skies and bold colors of northern New Mexico that these things threaten to become visual clichés. One of the virtues of this show’s wealth of katsina images is that they not only highlight what made O’Keeffe’s work distinctive, they also remind us of her place in the larger narrative of twentieth-century American art.

In New York, O’Keeffe had painted skyscrapers as well as flowers, and her work there is often included under the umbrella of Precisionism. The painters known as the Precisionists, (most notably Charles Sheeler and Charles Demuth, part of the group around O’Keeffe’s husband and mentor, Alfred Stieglitz) depicted the built environment of America in a way that emphasized the geometric solidity and clarity of its forms. They minimized the role of the brushstroke and the sense of the artist’s hand in ways influenced by the new medium of photography, as well as by the machine-made world they often depicted. Yet the industrial and the urban were not the sum of the Precisionists’ interests. In their search for distinctively American subject matter, they sought out the forms and artifacts of pre-industrial America as well. Sheeler and Paul Strand, another member of Stieglitz’s circle, photographed early American architecture, and Sheeler made numerous paintings and photographs of the old house he lived in and the “American primitive” objects with which he filled them. Their bold, simple forms and colors excited him and other American modernists as those of the katsinam excited O’Keeffe. O’Keeffe herself painted the simple vernacular structures she encountered around Lake George in a style that clearly anticipates her famous images of New Mexico’s adobe structures.

A desire for a sense of place, for a uniquely American identity, animated these artists and collectors, an impulse also felt by the American Scene painters of the thirties, such as Grant Wood. But this attraction to the “primitive” elements of American life, like other forms of modernist primitivism, also involved a desire to recapture a vitality, a sense of connection to larger forces, seemingly lost to citizens of the modern world. This can perhaps best be seen in the work of another major female artist of O’Keeffe’s generation, one who worked in a very different medium: Martha Graham. In the same years that O’Keeffe was discovering the landscape and cultures of New Mexico, Graham created ballets drawing on both American folk culture (Appalachian Spring, 1944) and ancient myth (Errand into the Maze, 1947).

In 1940, the year O’Keeffe finally purchased the house at Ghost Ranch in which she had already spent several summers, Graham created a short ballet, El Penitente. The dance is based on the rituals of the Penitentes, a Catholic lay brotherhood which played a major role in the life and culture of northern New Mexico. The stark wooden crosses the Penitentes erected in remote places also found their way into O’Keeffe’s paintings, though none of these are included in the current exhibition.

Placed in this context, O’Keeffe’s images of katsinam reflect the modernist fascination with abstracted and simplified forms, and perhaps also the modernist hunger for sources of meaning beyond the ken of western rationalism. (In these years a young Jackson Pollock was also experimenting with Native American spiritual imagery, though in a very different style). This may raise questions about a European-American’s appropriation of indigenous culture. However, O’Keeffe does not force the katsinam into a narrative of her own creation. In her sketches and watercolors of these figures, O’Keeffe renders the figures with great fidelity, though they often loom larger in her work than in life. It’s fascinating to compare literally pocket-sized landscapes, such as the one described above, with the sketches and watercolors in which figures only inches high may be doubled in size. In both cases, O’Keeffe creates a powerful sense of the physicality of the things she depicts even as she reduces them to their essence.

The actual katsinam on display in Denver create a sense of continuity with O’Keeffe’s images, rather than disjuncture. It is easy to see why their shapes and colors entranced her when looking at figures like that of Avatshoya’katsin’tihu, carved in 1890, painted black with white spots, and given a glossy blue-black feather as a headdress.

The works by contemporary Native American artists also provide an interesting counterpoint. Dan Namingha’s expressionistic paintings of katsinam in motion, animated by the idea that non-Hopis can only achieve fragmentary glimpses of these spirit beings, are motivated by a very different set of concerns than O’Keeffe’s. By contrast, the weavings of Ramona Sakiestewa, in which the katsinam are abstracted into minimalist bands of color, seem to share far more with O’Keeffe’s work.

A witty commentary on O’Keeffe’s place in American art and culture is provided by David P. Bradley, of Chippewa and Lakota Sioux ancestry. In his painting O’Keeffe, After Whistler (2007), O’Keeffe becomes Whistler’s Mother, shown in the act of painting a katsina (the actual painting depicted hangs elsewhere in the exhibit, next to a carving of the katsina portrayed). Her painting of the church at Ranchos de Taos hangs on the wall behind her, and the New Mexico hills she made famous are framed by the window. Abstracted clouds, echoing those that appear in her late paintings, hang in the sky.

Perhaps no other American painter was quite so concrete and specific. O’Keefe’s paintings are about the physical presence of a particular hill, a particular building or rock or katsina figure. Yet her focus on particulars often seems to create distance and mystery, rather than familiarity. Elsewhere in the gallery hang three canvases: Grey Hill Forms (1936), Black Place II, and Black Place III (both 1945). They are hung in chronological order, and each is also larger than the last, as well as more abstract in style. All three seem to depict the same bleak patch of black earth, exposed by the relentless erosion of the grey clay hill. Yet the more closely O’Keeffe focuses on that patch of earth, the stranger it becomes; the near by becomes increasingly far away.