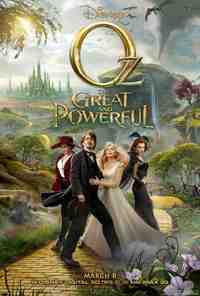 Oz the Great and Powerful

An uninspired waste of some of the most imaginative source material of all time.

I remember watching The Wizard of Oz when I was young and being amazed by the make-up and special effects. I watched a lot of movies as a kid and even then I knew that The Wizard of Oz was decades ahead of its contemporaries when it came to effects-heavy storytelling. For whatever reason, the image of the wicked witch’s legs shriveling up and disappearing under Dorothy’s house was what most intrigued me. How did they make the legs deflate like that? Were there wires or strings to curl up the toes? Was someone actually cast just to play the witch’s legs?

With Oz the Great and Powerful, none of that magic or mystery exists. Like The Wizard of Oz, Oz the Great and Powerful is based on the works of L. Frank Baum. But, where the 1939 movie was an unbelievably forward-thinking work of art that inspired filmmakers for decades, the movie we get in 2013 does nothing to advance the medium and only capitalizes on the technology of its predecessors. Director Sam Raimi takes no risks and his lack of inventiveness ruins what could have been a very entertaining prequel.

The film opens with a beautifully animated credit sequence with the flourish of a moving pop-up book. We are brought into the world of the story and the exotic land of Kansas. Oscar “Oz” Diggs (James Franco) is a magician with the traveling Baum Bros. Circus. Though he professes to possess true magical powers, his only real talents are sleight of hand and the ability to woo any woman he desires. His sidekick, Frank (Zach Braff), operates all the machines and wires that allow his “magic” to come to life on stage and runs interference for the rotating door of women who visit his trailer.

When the boyfriend of one of his conquests finds out about the, er, gift Oz gave to his girlfriend he is furious and comes after Oz. Narrowly avoiding a beating from the World’s Strongest Man, Oz escapes in his hot air balloon just as a tornado is approaching. The tornado spares him his life and he is whisked from the Land of Kansas to the Land of Oz, a place filled with creatures and fauna unlike anything he has ever seen. Very quickly, he meets a witch named Theodora (Mila Kunis) who believes he is the Great and Powerful Oz, the savior sent to save her people from an evil witch. Unable to refuse a beautiful woman or the promise of becoming king, Oz admits that he is, in fact, the great one they have been waiting for.

Theodora brings Oz back to the Emerald City to meet her sister, Evanora (Rachel Weisz), who served the previous king before he was killed by his own daughter, a witch named Glinda (Michelle Williams). Evanora is apprehensive of Oz and skeptical that he is actually the savior they were promised. Theodora is convinced and has already fallen in love with him; Oz’s feelings are less than reciprocal. In order to become king, Evanora tells him, he must first kill Glinda. Oz has serious issues with killing anyone, but then he is shown the vast riches which would become his and his reservations dissipate and he agrees though he soon discovers that he hasn’t been told the whole story.

As much as I dislike Tim Burton, I have to admit that he would have been a much better choice to direct than Raimi. Oz the Great and Powerful exists solely as a cash-generating machine for Disney inspired by the success of Burton’s Alice in Wonderland, so why not just give the movie to a man who has shown he no longer has any artistic integrity. Raimi made three very impressive low-budget films 20 years ago and has somehow managed to coast on those ever since. I have never watched a Raimi film and said, “Wow. That was a visually brilliant achievement.”

The film’s real downfall is the size of its budget, which is estimated to be north of $250 million. Had Raimi been given a smaller budget for CGI, he may have been forced to be creative and use practical effects for even a small portion of the movie. So much of what we see on the screen was clearly generated in post-production that it becomes boring. When you watch a film like The Prestige, your mind does backflips trying to discover how Christopher Nolan accomplishes his magic tricks without the aid of computer animators.

While I applaud Franco for his “life as art” approach to living, he is possibly the least engaging actor working today. Rather, he is talented – as evidenced by a handful of real performances – but he never bothers to actually act. As of late, he just grins and squints and expects that to carry him through the movie. Weisz and Kunis are wonderful actors, but they are terribly miscast here. They do their best, but neither is ever convincing. Williams is possibly the only bright spot in film, playing Glinda as the embodiment of goodness without making her brainless.

Oz the Great and Powerful suffers from the Hollywood affliction of commerce dominating art. There is no sense of wonder or imagination because that is not the goal of the movie. The only goal is to make money by riding the coattails of one of the greatest films of all-time.

Oz the Great and Powerful Trailer