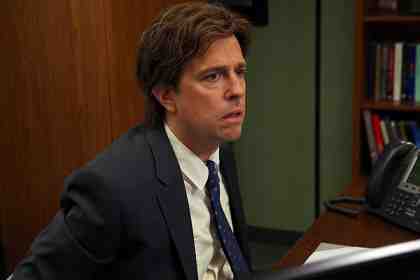 The Narddog Realizes He Screwed Up

After three months in show time, Andy’s back from his boat trip and, as Dwight puts it, looks disgusting. But before we get to that, let’s return to my favorite thing about the past two weeks, and possibly the entire season- Brian The Creepy Mic Guy (who is played by Chris Diamantopoulos- Moe from last year’s The Three Stooges movie).

Despite being fired last week, Brian The Creepy Mic Guy returns tonight to have lunch with Jim and Pam. I wonder if that would be awkward for the people filming the documentary to see their former co-worker while doing his job. I wonder if he’d even be “allowed” on the “show.” It turns out that Jim and Pam became friends with Brian the Creepy Mic Guy and his wife over the nine years of filming, so they were going to share a Valentine’s Day lunch with their two acquaintances. And also to thank him for saving Pam’s life. At the table, Brian reveals that he and his wife were splitting up (presumably because There’s Something about Pam), and he tells Jim that Pam had a mini-breakdown after their fight/phone call from several weeks prior.

Once again, I don’t know what the show is doing with Brian the Creepy Mic Guy. Are we supposed to see him in a positive light, as a sad figure, or, at the very least, entertain him as a possible romantic rival for Pam’s affections? Continuing the lunch just to engage in a relatively public pity party does not shine well on him. Nor does outing Pam to her husband during this occasion. If Brian is meant to function as some kind of angel who forces the Halperts to recognize their marital strife and overcome it, that would be some noble purpose behind his existence. But right now, he seems more likely to be a home wrecker and probable stalker.

But the main point of the episode is that Andy has come back from his three-month boat trip with a giant beard and even bigger ego. Although the branch benefited from his absence over the past three months, his return (as well as the return of the Nard-Dog persona and all Nardian slang) immediately rouses the ire of the Dunder Mifflinians, who were used to operating (and operating successfully) without a clueless boss bungling everything. In only a brief phone call, he costs the company its record-breaking Scranton White Pages contract because he didn’t approve the terms offered by Dwight. Moreover, he has been lying to David Wallace about being gone during the entire time and expects the rest of the crew to cover for him. Even his girlfriend Erin has become fed up with his antics and plans to dump him when he returns. Although she initially chickens out, she thankfully ends the episode kissing Pete, telling Andy that they’re through, and (unintentionally) revealing his three-month absence to David Wallace. I’m incredibly glad that they didn’t try to stretch out that element of the love triangle much longer. Now let’s keep Erin confident in her decision.

Nevertheless, the show’s handling of Andy is a bit odd, especially after two seasons of putting him on a pedestal. I can’t say I’m disappointed by this turn of events. After they elevated Andy to the star, the show and the character suffered tremendously. His unlikeable edges were dulled down to create a milquetoast figure that it was difficult to root for, partly because the show made it so obvious how much they wanted the audience to root for him. Andy’s back in full self-absorption mode now, and I hope the show keeps him this way. The worst thing they can do is provide him with a redemption arc or try to make him “cool” or “beloved” again. (Remember how often the staff sided with him last season?) But I can’t deny that it is bothersome for the show to have rendered his journey over the past two seasons moot. I obviously don’t know the future’s plans for him, but I can’t see Andy Bernard harming the show any more than Andy Bernard. If he goes away again after three episodes, I certainly won’t be mourning his loss.

The episode title, “Couples Discount,” ends up being the least significant plot. (Though I guess the title can also refer to the other couples in turmoil throughout the episode.) With the episode taking place on Valentine’s Day, the local mall was offering discounts for couples who shop together. The office partners up to take advantage of the deal (with pairings including Nellie/Clark and Oscar/Darryl), but nothing much comes of it. It’s a short and unnecessary segment that neither hits its few laughs hard enough nor goes on long enough to really mine the humor of these characters lying to get cheap goods.

Additional Thoughts:
• I hope in every episode we see Brian becoming more and more pathetic and desperate. I want him to become Rickety Cricket to Pam’s Dee Reynolds.
• At the end, the Halperts decide to fight rather than runaway from their problems. I wonder if the rest of the filmmakers will tell Brian that his scheme is falling apart. I foresee a strawberry handkerchief in their future.
• I liked Clark’s voice cracking when he learns that they lost the White Pages account.
• Having watched the 30 Rock series finale, I was impressed with the way the antepenultimate episode could have also served as a series finale, which allowed the final two episodes to really delve into the characters and their response to the end. For a show that was mostly about broad humor, I thought it hit the emotional notes quite well and am curious to see if The Office can pull off such a fete.
• Speaking of which, The Office announced that its hour-long series finale will take place on May 16 from 9 – 10 PM EST.