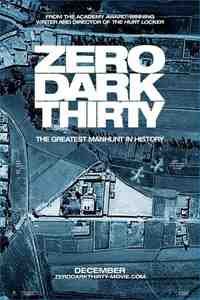 War is hell, and Kathryn Bigelow shows us why in a tense, nuanced new film.

In May of 2011, American soldiers performed a midnight raid of a compound in Abbottabad, Pakistan, and killed Osama bin Laden, the former leader of Al-Qaeda and the figurehead behind the 9/11 terrorist attacks. Facebook exploded with graphic photos of his dead body, captioned with celebratory exclamations. Terrorism is dead! America triumphs!

After the 9/11 attacks, finding bin Laden was a decade-long process, a lengthy, complex route punctuated by car bombings, attacks on the world’s largest cities, and hundreds of deaths. Kathryn Bigelow’s 2010 movie The Hurt Locker is a film whose overriding message is that war is hell, even for (especially for?) those who literally defuse bombs. In late 2012, Bigelow released her newest effort, Zero Dark Thirty, an account of the hunt for, and eventual death of, Osama bin Laden. This new film, very different in locale and tone from her last movie, is also about war as hell; no one, not even the CIA desk jockey scrutinizing from the relative safety of a computer as tiny men blow up tiny cars, comes out of battle unscathed. Hanging over Zero Dark Thirty is a pall of strident assertions that the Obama administration released classified information to filmmakers in a play to curry public favor. The CIA responded that it provided no such information, and a week ago a senate panel was convened to look into the matter.

Whether or not Bigelow and screenwriter Mark Boal (who also wrote The Hurt Locker) obtained classified information regarding the hunt for bin Laden, the resulting film is a pièce de résistance. The movie begins on a black screen with real 911 calls from people inside the World Trade Center on September 11, 2001. “It’s so hot, I’m burning up!” a woman sobs, as the dispatcher murmurs, “Oh my God, oh my God.” It is a brutal, horrifying punch directly in the gut. It’s also an ingenious move – the next scenes, featuring very realistic torture of detainees (including graphic depictions of waterboarding), are much easier to take once we’ve had a vicious reminder of the crimes these men helped to commit.

As young, pretty CIA agent Maya (Jessica Chastain) watches, Dan (Jason Clarke) beats and intimidates a prisoner. The camera shifts from Maya’s anguished face to the man’s palpable discomfort; Dan steps outside to inhale a cigarette, his gaunt features and shaggy hair betraying his torment. The movie has been criticized for fetishizing torture, for focusing lovingly on violence. No, that it doesn’t do. Dan and Maya, solid and resilient though they are, do not revel in the acts they commit. “This is what defeat looks like,” Dan sneers to the prisoner, and over the course of the film, you’ll find yourself repeating that line. This isn’t triumph. This isn’t glory. This is what defeat looks like.

Maya is a woman possessed, acting brashly on intuition over the course of eight years. Her slight frame and long red hair are out of place in rooms full of men clad in black suits and ties. Her voice, at a higher register than those of her male counterparts, is jarring when directed toward a bound man. In boardrooms and offices, she leans forward, face stony, refusing to be cowed by a director’s temper tantrum. She introduces herself to the Director (James Gandolfini) as “the motherfucker who found him,” without a hint of a smile. She faces off against the CIA’s top agent, Joseph Bradley (Kyle Chandler, a.k.a. Coach Taylor), threatening his job if she doesn’t get what she wants. In short, this woman has more balls than anybody else in the room. She, like The Hurt Locker’s William, risks life, limb, and sanity to ensure no more lives are lost.

Chastain’s performance is nothing short of brilliant (and very worthy of her Best Actress nomination). Her face, a hard mask of determination, features delicate but sharp, barely betrays her sorrow when colleagues die, her fear (short-lived though it is) when bullets riddle her bulletproof car, her anxiety when she sends a company of men to kill someone for her. She’s a force of nature trapped behind a desk. Chastain herself, who seemed to pop out of the woodwork last year with her Oscar-nominated performance in Terence Malick’s Tree of Life, is a force to be reckoned with.

Boal’s screenplay is ingenious; Zero Dark Thirty marks the third two-and-a-half-hour movie I have seen in theaters this week, and of all of them, it is the most compelling throughout (I’ll let you figure out which were the other two). Dialogue is simple, though the characters throw around terms that don’t make immediate sense to laypeople. Characters are simple, static; generally with a film about a female protagonist, there’s a subplot involving romance. There is no romance here, only determination. The climactic raid of the Abbottabad compound, including a black ops helicopter crash and subsequent explosion, is so tense I had to remind myself to breathe, even though we all know how the story ends.

Bigelow, who won Best Director despite ex-husband James Cameron’s best efforts in 2010, is the only woman in Hollywood making war movies. Noted asshole Bret Easton Ellis claimed on Twitter recently that she’s only an interesting filmmaker because she’s a hot woman. I disrespectfully disagree with his assessment. Bigelow is an interesting filmmaker because of her talent and perspective. Certainly, she’s beaten a path through the Hollywood boys’ club and been the first female to win the Best Director Oscar. These things are notable wholly because of her gender. More important, though, is the fact that she continues to produce work that amazes us with its artful tension, nuance, and complexity. In this sense, you may feel, watching Maya face off against the men in suits, barreling a hundred miles an hour toward a seemingly impossible goal, that you’re getting a glimpse at Bigelow’s own struggles.

I am almost always the sole unaccompanied woman in theaters for horror and war films. This isn’t because I’m trying to be part of the boys’ club, but because I actually love film. It’s clear to anyone watching that Bigelow does, too – and her films are different from those of many of her (male) counterparts in that there is no glamour here.

War is hell. Bigelow’s perspective, her focus on lonely, purposeful characters in the midst of chaos and violence, portrays this more eloquently than most of her colleagues could hope for. In the final shots of Zero Dark Thirty, a pilot tells Maya she must be pretty important, and then asks her where she wants to go. Her mask shatters, and for the first time we see her as a person, a human being who’s done and seen nightmarish things, whose only sense of purpose is now gone – and whose triumph actually looks a lot like defeat.