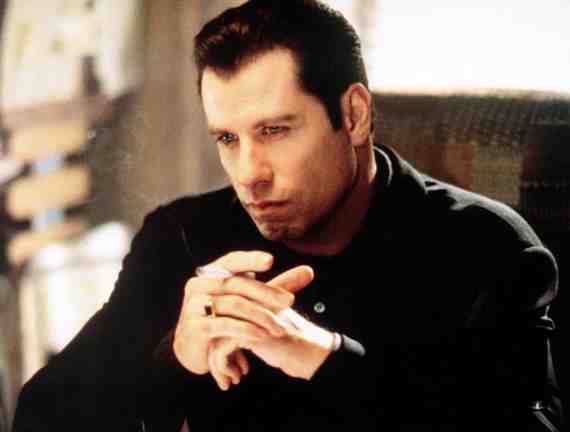 John Travolta as Chili Palmer in Get Shorty (1995-R)
©MGM

One year after reviving his career in Pulp Fiction, John Travolta gracefully slipped back into the role of a mobster. Like Vincent Vega, Get Shorty’s Chili Palmer is ultracool, sharp-witted and drawn to dressing in black. He can shatter your nose with a punch or fire his Colt Detective Special accurately enough to add a part to your hairline.

But he’d rather not. Because this is a reluctant thug—or loan shark, to be specific. What Chili is really looking to do is get out of the rackets and into Hollywood. From one dirty business to another.

“In Pulp Fiction, we played characters who were hell-bent on death . . . high all the time and killing people,” Travolta told the Times of London. “In [Get Shorty], we are hell-bent on life.”

That’s the setup for this quirky film, based on an Elmore Leonard bestseller. There is a three-pronged, interweaving script involving an insurance scam, a drug-smuggling sting and a movie-making venture. Each, it turns out, is a cesspool. And throughout, Travolta plays the charming criminal who never raises his voice and never loses his shy smile.

Rather than bust jaws, Chili moves you with his confidence. “Look at me,” he keeps telling his adversaries. “Look at me like I’m looking at you.” He then calmly persuades even the toughest-minded adversary to repay a debt, back off a fight or go into business with him.

You can’t help but root for this guy surrounded by a cast of oddball characters.

Those characters—and the sharp dialogue—are what make Get Shorty work. Beyond Travolta’s Chili, there’s Harry Zimm (Gene Hackman), a schlock producer (his finest work is Bride of the Mutant) trying to spin financial misfortune to his advantage. There’s Martin Weir (Danny DeVito), a self-absorbed screen superstar who sits in the same restaurant seat each day so that he can gaze at the billboard touting his latest film.

Actors in smaller supporting roles also shine. Delroy Lindo plays a menacing drug dealer who, like Chili, is owed a debt by Zimm and is looking to break into movies (who isn’t?). Dennis Farina steals a few scenes as a mid-level mobster who tries to bully Chili, but keeps getting his face disfigured as a result. Bette Midler, Harvey Keitel and Penny Marshall all show up, as does one particular paragon of gangster actors—before he struck it big. More about that guy later.

Overall, this cast (through 2010) has combined to be nominated for nine Oscars, 27 Golden Globes and 12 Emmys—lugging home more than a few. Unfortunately, Get Shorty garnered no Academy Award nominations (we certainly would have taken it over Babe as a Best Picture hopeful), although Travolta collected the Golden Globe for best performance by an actor in a musical or comedy.

To be honest, the dense plot is difficult to describe in a few paragraphs. In short, Chili heads from Miami Beach to Las Vegas to Hollywood, chasing a $150,000 casino debt run up by Hackman’s character Zimm. Chili confronts the producer at his home one night, and persuasion turns into conversation about Hollywood.

Chili, who is looking for a lifestyle change, pitches a story to Zimm about another case he’s working on—a deadbeat dry cleaner (David Paymer) who faked his own death and skipped town with $300,000 in insurance money. Chili must track down the guy and collect the debt for inept Miami Beach mobster Ray Barboni (Farina).

Zimm loves the idea, but he’s got other concerns. Drug-dealing limo executive Bo Catlett (Lindo) has made a large investment in the producer’s next film. Unfortunately, Zimm has already blown that money. So Bo decides, as compensation, he will muscle his way into Chili’s new venture.

There’s also an international cocaine deal being monitored at the airport by obvious and jumpy DEA agents. That angle is complicated by the disappearance of a Colombian lord’s nephew. And there’s the repeated riff on Hollywood, convincing you that the best preparation for becoming a film producer is a stint in the underworld.

Truth be told, the satire in Get Shorty barbs the film industry much more sharply than it does the crime industry. We learn about movie stars that never pick up the check, never order from the menu, rarely know their own phone number or zip code and often sit facing the sun as an excuse to show off fancy sunglasses. And they’re sheep. There’s a wonderful little thread running through Get Shorty that begins with Chili seeking to rent a Cadillac at the airport and settling for an Oldsmobile Silhouette, which is described as “the Cadillac of minivans.” By the end of the movie, he has convinced all of Hollywood to drive the soccer- mom vehicle.

The patter, much of it taken straight from Leonard’s novel, will remind you of a lot of Pulp Fiction. In one scene—evocative of Pulp’s French McDonald’s vs. Burger King discussion—mobsters debate the use of “i.e.” vs. “e.g.” as a conversational tool. In another, one of Chili’s 25-watt cohorts reads an article stating that most Americans die in bed, so he decides to start sleeping on the couch.

HIT: Even before he was Jersey mob boss Tony Soprano, actor James Gandolfini knew how to play a tough guy (8MM, True Romance). Here, however, he’s anything but menacing as Bear, a bodyguard and former stuntman. Gandolfini’s Southern-bred character alternately dotes on his young daughter and keeps getting throttled as he tries to protect his boss. Still, even as he gets beat up, you can see some of Tony Soprano’s classic gestures in their formative stages—like the one where he girds his chin and stares dead-fish eyes at a challenger.

WHAT THEY WROTE AT THE TIME: “This playful, thoroughly entertaining spoof of Hollywood moviemaking stems from the more bitter [though equally entertaining] novel by Elmore Leonard. The famous crime writer, apparently disgusted by the mediocre movies Hollywood has made from his previous novels, had the ingenious notion to compare the capricious, dishonorable nature of organized crime to the movie business.”—Ralph Novak, People Weekly

REPEATED WATCHING QUOTIENT: High. The acting is terrific, Leonard’s script is witty and the plot twists get better with each viewing.

DON’T FAIL TO NOTICE: At several points, characters are seen reading a copy of Newsweek. Look closely and you’ll spot DeVito’s character of Martin Weir on the cover. The headline, “Napoleon, Solo,” touts Weir’s supposed biopic on the French emperor—which, come to think of it, would make a great role for DeVito.

VIOLENCE LEVEL: Decent. Ray Barboni (Farina) is the leading psychopath, stepping on an old man’s head and socking a woman in the jaw. Plus, you get to see Gandolfini get picked up by the balls and tossed down a flight of steps.

BET YOU DIDN’T KNOW: The undersized, indecisive, self-obsessed movie star character DeVito plays is based on Dustin Hoffman, according to Leonard. The author met Hoffman when they attempted to make a deal on a movie treatment of Leonard’s book La Brava.

Hoffman and director Martin Scorsese kept the author shuttling from his Detroit home to New York, each time looking to rework the script, Leonard recalled to the Guardian of Great Britain. “Finally I said to them: ‘Look, it’s okay for you guys, but I’m not getting paid for this.’ Hoffman told me, ‘Don’t worry, you’ll be paid retroactively.’ My agent rolled on the floor laughing when I told him this. He said, ‘They’ll never make the picture.’ “

Which, of course, they didn’t.

BET YOU DIDN’T KNOW II: In an alternate version of Get Shorty—edited to be shown as an in-flight film—the fiery plane crash scene leading to the insurance scam was chopped out. All the dialogue about it was altered to describe a train wreck.

“I KNOW THAT GUY”: The mob boss enjoying a massage on his yacht? That’s Moe Greene, dammit! Actually, it’s actor Alex Rocco, whose Moe Greene character in The Godfather had the gall to tell off Michael Corleone (“Do you know who I am?!”), leading to him getting a bullet through the eye during his daily rubdown. You would think he’d know better than to climb back onto the massage table in another movie.

BODY COUNT: Three. One guy is shot, one gets pushed over a railing and one poor sap gets both shot and sent over the railing.

IF YOU LIKED THIS, YOU’LL LIKE: The Player, Robert Altman’s 1992 nasty send-up of Hollywood. The twisting plot focuses on a studio executive (Tim Robbins) caught up in blackmail and murder.