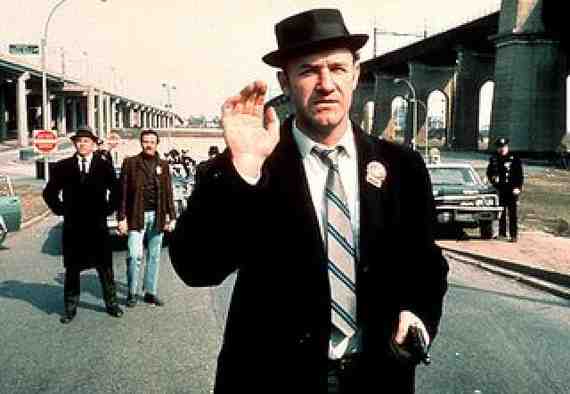 Gene Hackman as Popeye Doyle in The French Connection (1971-R)

We’ll admit it: The French Connection is a movie more about the cops than the bad guys. The film that earned Gene Hackman a Best Actor Oscar largely spotlights the exploits and foibles of Jimmy “Popeye” Doyle, a driven but reckless New York City narcotics detective.

But taken from the other side, it’s a damned good story about the mobsters. Popeye’s target is Alain Charnier (Fernando Rey), a suave heroin importer from Marseilles. The French Connection traces how Charnier tricks a naïve friend into smuggling a large stash of drugs through the Port of New York, lines up a buyer and attempts to put $32 million of smack onto the streets.

Okay, maybe we’re reaching just a little to call this a gangster movie. But The French Connection so vividly shows how drug trafficking worked back in the 1960s that we felt we had to include it here.

Much of its potency stems from the fact that it’s all based on a true story. Hackman’s Popeye Doyle and his partner Buddy Russo (Roy Scheider) are modeled after larger-than-life NYPD detectives Eddie Egan and Sonny Grosso. That duo busted an organized crime ring spanning two continents in 1961, seizing a then-record 112 pounds of heroin. Their story was told in a bestselling book by Robin Moore that became the template for this movie. Egan and Grosso, by the way, have small roles in the film as police supervisors.

Mostly, The French Connection focuses on pursuit. It opens in Marseilles with a detective tracking our drug kingpin and getting killed in the process. From there, the smugglers and the cops engage in a dance of circling and evading through a series of stakeouts, peek-a-boo chases through New York and the famous scene where a car pursues an elevated train. More about that coming up.

The subjects of all this police attention are Charnier (called “Frog One” by the narcs) and the Lincoln Continental he has managed to sneak through U.S. customs. Inside the car is 170 pounds of pure, uncut heroin, dubbed by Charnier’s impressed chemist as “Junk of the Month Club (quality). Sirloin steak. Grade-A poison. Absolute dynamite.”

At one point, the suspicious cops impound the Lincoln and take it apart, piece by piece, looking for the haul. They tear up the trunk, the lining, the glove box, but can’t find anything. Finally, they check the deep recesses of the rocker panels—where they find dozens of colorfully wrapped packages filled with heroin worth millions.

The star, of course, is Hackman as Popeye Doyle. There’s no glamour to this character. Popeye is racist and violent and amoral. He cruises Bedford-Stuyvesant in a ridiculous porkpie hat, strutting into bars to brutalize the soul-brother patrons and bust the street junkies.

Popeye’s got a shaky history and knows he needs a major bust to redeem himself. There’s a subplot about other cops not wanting to work with him. Apparently, a good officer was killed during one of his operations and the others think Popeye was to blame.

A shocking moment occurs toward the end of the film, and Popeye’s lack of remorse after it takes place will stay with you. You realize that his motivation all along hasn’t been about helping right triumph over wrong. It’s been about winning at all costs.

While Popeye is all single-minded obsession, the drug dealer Charnier is calm and calculating. And the contrast between the two antagonists goes way beyond their personalities. Charnier lives with a sexy young girlfriend in a stone castle so close to the Mediterranean that he can fish from his front yard. Popeye, meanwhile, lives by himself in a blue-collar public housing apartment cluttered with trash.

There’s a terrific scene midway through the movie in which Popeye stakes out Charnier. On a cold and dirty corner, the detective blows into his hands and stuffs his face with a limp slice of pizza and coffee from a Styrofoam cup. Meanwhile, the drug dealer luxuriates across the street in a four-star hotel, dining on a multicourse feast by a fireplace. Life just isn’t fair.

The French Connection was a huge hit when it came out in 1971. Made on a budget of just $1.8 million, it grossed more than $50 million, the third-best box office tally for any movie released that year.

Hackman was already a respected actor at the time, having been nominated for a Best Supporting Actor Oscar four years earlier for his work in Bonnie and Clyde. His Best Actor Oscar for this movie, however, established him as a major star for decades to come.

The movie also won the Best Picture Oscar (topping A Clockwork Orange and The Last Picture Show) and took home three other Academy Awards, including one for Best Director for the 36-year-old William Friedkin.

And beyond all that, The French Connection can be credited with helping create the tough-but-flawed-working-class-cop film character that flourished in the 1970s and remains prevalent to this day. And this movie can certainly be seen as the root of more-recent efforts like Prince of the City, Training Day and The Departed.

Oh, and one more thing. We told you the movie is based on an actual case. It ends with the freeze-frame postscript scenes that tell you what happened to each of the major characters. But it doesn’t tell you this—a year after The French Connection was released, it was revealed that all of the heroin confiscated in the original case had been stolen from the NYPD’s property department.

HIT: New York City is more gritty than pretty in this period piece, which was shot before the Big Apple’s late-20th century revival. The skies are gray, vacant lots are strewn with debris and there’s a doomed look to the city—right down to the rusty Rheingold beer signs. It’s not attractive, but the urban tangle is a genuine representation of a time and place.

WHAT THEY WROTE AT THE TIME: “There is only one problem with the excitement generated by this film. After it is over, you will walk out of the theater and, as I did, curse the tedium of your own life. I kept looking for someone who I could throw up against a wall.”—Gene Siskel, Chicago Tribune

PIVOTAL SCENE: Popeye loses his tail on Charnier’s henchman, Pierre, as Pierre climbs into an elevated train. So the desperate detective commandeers a passerby’s car and threads through crowded city streets trying to keep pace with the train while staying under the El tracks.

It is, quite simply, the greatest chase scene ever. Popeye rumbles into oncoming traffic, smacks several cars along the way and nearly runs over a woman pushing a baby stroller.

The scene was shot live in Brooklyn and without the permission of New York City authorities. Stunt driver Bill Hickman (who also appears in the movie as federal agent Mulderig) essentially did it on a dare from Friedkin, who challenged Hickman to top the great chase scene he had engineered three years earlier in Bullitt.

According to an interview Friedkin did with the American Film Institute, the director himself climbed into the backseat to operate the primary camera while Hickman girded himself with a shot of Jack Daniels. Hickman then raced 26 blocks at 90 miles per hour, as a second unit car with Hackman at the wheel trailed behind. The squealing cars and endangered pedestrians you see along the way did not know they were part of a movie shoot.

“It was a terrible thing for us to do,” Friedkin conceded in the AFI interview. “Really, it was life threatening. We were lucky to come out of it without being arrested.”

BET YOU DIDN’T KNOW: The accidents during that chase scene were not scripted. In one, the lead stunt car sideswiped a transit bus. In another, a man who lived a few blocks away drove across the path of the chase at 86th Street and Stillwell Avenue and was run into by the trailing car carrying Hackman. The man was reimbursed for his damages.

REPEATED WATCHING QUOTIENT: Worth a viewing every five years or so.

BEST LINE: “Do you pick your feet in Poughkeepsie?”—Popeye’s trademark line to suspects, designed to rattle them.

CASTING CALL: Quite a few actors almost got to play Popeye Doyle. Lee Marvin, James Caan and Peter Boyle all turned down the role—Boyle because his agent predicted the movie would flop. Paul Newman was contacted, but his fee was too high. Jackie Gleason was considered. And New York columnist Jimmy Breslin actually rehearsed on the set for three weeks before he was let go—in part because he couldn’t drive a car for the chase scene.

Meanwhile, Fernando Rey was cast as the French smuggler by mistake. Director William Friedkin confused Rey with Francisco Rabal, an actor he wanted to hire after seeing him in the movie Belle de Jour. Once Rey was brought over from France, though, Friedkin decided to keep him.

GOOF: In the opening scene, Popeye and Buddy go into a dive bar to roust potential drug users. When they enter, it is dusk. When they chase a suspect out onto the sidewalk a few minutes later, it is a sunny midday.

DON’T FAIL TO NOTICE: In the scene of the drug-laden car being unloaded at the Port of New York, you can catch a glimpse of the World Trade Center towers under construction in the background. This is believed to be the first appearance of the towers on film.

VIOLENCE LEVEL: Moderate, although it was considered extremely violent back in 1971.

IF YOU LIKED THIS, YOU’LL LIKE: The French Connection II, which is an adequate sequel. A better suggestion, however, is The Seven-Ups, starring Scheider as a NYPD detective who discovers a plot to kidnap mobsters for money. It was written by ex-cop Sonny Grosso, costars Lo Bianco and features another great car chase.