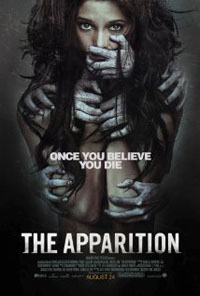 The first thing you should know about me is that, come late August or early September, I’m biased in favor of movies like The Apparition. Brief, spooky, one-off horror flicks get audiences in the mindset of Halloween. (Why this one didn’t release closer to All Hallows Eve, I’ve no clue.) The second thing you should know is that, at my local theater, Premium Rush was entirely sold out on opening day, and that there were a total of three people in the theater playing The Apparition. This is with good reason.

Production company Dark Castle has had my eyes and ears since 1999, when its debut release, the remake of House on Haunted Hill, made a minor splash. House on Haunted Hill retains the campiness of its Vincent Price-vehicle predecessor while updating to such talent as Geoffrey Rush (and Chris Kattan, but never mind that). More importantly, the asylum was a terrifically spooky setting and the effects were downright disconcerting. Otherwise, it was an awful movie. Since then, Dark Castle has mostly stuck with movies like that – little, one-off horror flicks that boast a lot of fun effects and little else (Gothika, Thir13en Ghosts, Ghost Ship, Splice). So when the Dark Castle logo pops up on the trailer for The Apparition, you know exactly what you’re in for.

The Apparition is loaded with potential and fails at every turn. In May of 1973, a group of paranormal psychologists strove to contact a former colleague of theirs on The Other Side (cue the eerie music). Their success inspired a group of college students to try the same thing, but in the most “high tech” way possible. What kind of university provides its undergrads with the sort of expensive equipment to which these have free access in the name of “paranormal science,” I don’t know. In The Charles Experiment Part Deux, one of the four students, pretty Lydia, disappears into a wall. (This is actually reminiscent of House on Haunted Hill.)

A few years later (we assume), we’re introduced to Kelly (Ashley Greene) and Ben (Sebastian Stan), a young couple who have just moved into Kelly’s mother’s “investment home” in an empty Palo Alto development. Kelly is a veterinary assistant, Ben some kind of tech customer service person – and Kelly immediately exposes herself as somewhat of a stereotypical “nag.” (She’s extremely attractive, though, so we’re meant to believe he’ll do anything to stay with her.) Stan and Greene have such flat chemistry you’d hardly know they were interacting with each other, and Ben’s catering to Kelly’s every whim does little to advance the story.

In the first ten minutes, the two go to Costco and buy a tent, a cactus, and a cartful of things they don’t appear to need. These things come in handy as plot devices later, of course, but the mechanism is clumsy. One supposes writer Todd Lincoln wanted to shove down our throats the fact that the two lovebirds are “playing house.” Likewise, the movie contains multiple soaring shots of the dusty desert and the “little boxes” of the development in which the pair live, a disturbingly vacant landscape criss-crossed by buzzing power lines, that ever-present sign of civilization. There is great potential for a pointed commentary regarding the emptiness of American consumerism. Unfortunately, it’s never realized.

That night, weird things start to happen in the brand new house. The doors open with locked deadbolts; laughing voices emanate from the walls; the neighbor’s dog wanders in and dies abruptly after catching a glimpse of something the humans can’t see. As the paranormal occurrences amplify, so do mysterious phone calls to Ben from someone named Peter. Ben, as it turns out, was the guy behind the camera for The Charles Experiment Part Deux, the one whose lingering shots on Lydia’s rear end and assets are supposed to endear him to us. Ben knows exactly what’s going on, but fails to tell Kelly. To her credit, she kicks him out of the house.

Of course, these events and their eventual culmination in Ben’s forcible exit are sprinkled with gratuitous underwear shots, halter swimsuit tops, and storming around in a negligee. Kelly also uses the fancy heat-sensing equipment to search for an entity (how that works is beyond me), all the while backing up through what seems like every room in a pitch-black house. In bad horror movies, even women who are supposed to be educated and independent wear very little clothing and turn into complete headcases the moment their men vacate the premises.

The two finally hook up with Peter (Tom Felton), who brings some kind of equipment (seriously, where are these twenty-somethings getting this kind of gear?) that does something like “amplify the EEG.” There’s talk of “reversing the magnetic field.” It’s a lot like those “Ghost Hunters” shows on TV – exposition is occurring, but you’re never sure if it’s really explaining anything. Two days go by without a single spirit, and everything seems hunky-dory…until Peter gets violently removed to The Other Side.

Long story short, no one remains on this plane. On The Other Side, Kelly wanders into (what else?) Costco and meanders the empty aisles; this is actually a jarringly apt and frightening version of purgatory – she is doomed to roam the aisles of Costco for all eternity. Again, the potential for a scathing observation on consumerism is here, but never quite fleshed out.

I’m glad to see the actors from Harry Potter (Felton) and the Twilight (Greene) franchises getting work outside the respective YA-lit series that made them famous. Unfortunately, they (and Luke Pasqualino, who made his debut on the brilliant UK series “Skins”) don’t do a great job here. To be fair, none have much to work with. Greene spends a lot of time in her underwear, Felton spends a fair bit explaining things that make no sense, and Pasqualino only has a querulous line or two.

The Apparition does feature a few spooky scenes. We see little or nothing of the actual Apparition, which is both endearing and obnoxious. For a movie with a budget of $17 million, they did the best they could. What’s puzzling is that its tagline, “Once you believe, you die” lends itself to a totally different story – one that’s about the complexities of intelligent people believing in the supernatural, and the idea that ghosts are only real if we trust they are. This “believing” is barely touched upon in the film: yet another total failure. The movie, as a whole, is not good. But if, like me, you’re ready to start gearing yourself for Halloween’s horror fare, it’s a baby step toward the good stuff. It could’ve been, at the least, a fun one-off horror movie. Unfortunately, it’s hardly even that.