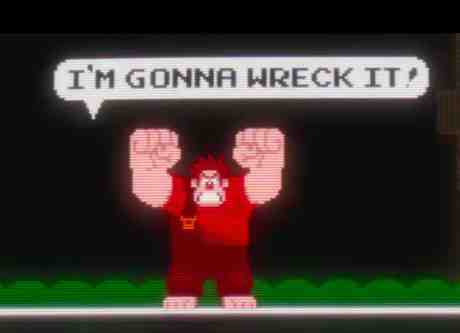 Disney’s upcoming film Wreck-It Ralph operates on a reasonably simple idea. The antagonist of a 1980s arcade game grows weary of his villainy, and sets out to prove he can be a good guy somewhere else. This upsets the balance of Video Game Land, or Digital Hell, or whatever the world he inhabits may call itself. John C. Reilly stars as Ralph, a meat-fisted fellow whose private persona is deceptively sensitive and good-natured. He wants to be nice, even though the world does not seem to want him that way. He longs to be liked, rather than appreciated as the counterpoint to a sanctioned “hero.”

At a glance, Wreck-It Ralph seems problematic. For one thing, the animation snags on several very basic questions of style. Outside their respective games, these characters, from 8-bit to next-gen, all exist as smooth computer-rendered figures. Ralph only appears as a jagged, pixel-heavy throwback while on the clock. If this movie is supposed to take place in some sort of digital Toontown, would it not make more sense to depict the social friction between clunky old “classic” video game characters and sleek, sharply detailed folk of today’s gaming universe? It seems like that would account for half the jokes in a story like Wreck-It Ralph. What sounds funnier: a genre-hopping quest across the video game spectrum by a generic galoot drawn in marshmallowy 3-D, or the same undertaken by a two-dimensional Nintendo relic who looks ludicrously out of place in any world but his own?

The movie I am imagining is probably an edgier, more adult-themed work. Unfortunately, that may be the treatment this premise truly deserves. Disney’s vision looks like a candy-colored advertisement for any number of Christmas season marketing tie-ins. Bear in mind that this is a movie taking place entirely within children’s video games. This does not mean it has to be all bad (Cars had a little more to offer than merely selling toy cars, after all). With any luck, the script is brimming with hilarity and strength of character which failed to make it into the preview. Instead, Ralph’s big soulful eyes only portend the movie’s inevitable maudlin moment when the character decides he is nothing special after all. Fortunately, it is equally probable that by tapping some facet of his cast-off former persona, he will come to realize that yes, he is too something special!

Disney seems to have gone for broke in licensing a supporting cast of major game-franchise characters, making direct references to everything from Pac-Man to Super Mario Bros. to Street Fighter II. But should they have, simply because they could? Parody often plays better with thinly veiled substitutes for instantly recongnizable characters. Of course we can see that Wreck-It Ralph is really an amalgam of Donkey Kong, Rampage, and that disturbing Popeye arcade game (anyone?). And at some point there’s some kind of Mario Kart action disguised as Candy Land. After all that cutely crafted spoofing, is the target audience really hungry for actual cameos by… Zangief? And Kano?

These are all minor concerns, though, compared to the overriding sense that, no matter how they dress it up, it seems in a vague way that we have seen all this before. A lot. Generally in the Pixar studio’s body of work.

The generic feeling of this trailer is no token of doom. It is a warning sign, though. The humor of a fictional character in a support group with other popular villains is teeth-achingly thin, as is Ralph’s schoolyard banter with a petulant child in a tree. On the bright side, most of Sarah Silverman’s funniest work has been as a voice actress. And to be fair, John C. Reilly’s in-character delivery of his signature phrase, “I’M GONNA WRECK IT!” is pretty hysterical. It seems clear that Wreck-It Ralph is an identity fable of the tried-and-true Disney mold. It looks primed to charge in one of two obvious directions – realizing the value of being exactly who you are (Toy Story, Finding Nemo, The Nightmare Before Christmas), or turning things upside down in the name of positive self-reinvention (Up, Monsters Inc.). Either way, there will probably also be a helping of the classic Winnie The Pooh principle – friendship and loyalty are everything, especially since everyone is eccentric and kind of a dope in some way. We stay alive by sticking together. The key question is whether or not Wreck-It Ralph, novel though its outward aspect may be, has anything new or unique in its heart. It is simply too early to tell. If the script has any guts, it will stress not only the appeal, but the absolute necessity, of villains. Without them, after all, what good are heroes? Hopefully the makers of Wreck-It Ralph are willing to dig a little deeper and darker in the service of this theme.

The great hope of this film is the talented core group making it happen. Rich Moore, whose past directing credits include many excellent of The Simpsons and Futurama, has the head and the heart to helm such a project. Rounding out the voice cast are wacky comedy veterans like Jane Lynch and Jack McBrayer. This could be a lot of fun, and with any luck it will be. Though it bears more than a passing resemblance to a Pixar pic, Wreck-It Ralph is formally a fully in-house Disney production. This is a distinction important only to nerds, though it may mean some subtle differences in character design. Meanwhile, Disney appears to be playing it safe this summer by backing Pixar’s upcoming blockbuster adventure Brave.

The full nature of Wreck-It Ralph will be difficult to visualize before seeing the finished film, which may be a good thing… or not. Who could tell what Despicable Me and Up were going to be like before they actually hit theaters? While each has its own moderate to major problems, they are examples of a doubtful premise turned pleasant surprise. Hopefully, Wreck-It Ralph will end up being family comedy gold, but it certainly has not begun with its best foot forward.

Wreck-It Ralph is a production of Walt Disney Animation Studios. It is currently scheduled for release on November 2, 2012.

Dan Fields is a graduate of Northwestern University with a degree in Film. He has written for the California Literary Review since 2010.

He is also co-founder and animator for Fields Point Pictures, and the frontman of Houston-based folk band Polecat Rodeo.

Dan Fields is a graduate of Northwestern University with a degree in Film. He has written for the California Literary Review since 2010. He is also co-founder and animator for Fields Point Pictures, and the frontman of Houston-based folk band Polecat Rodeo. Google+, Twitter