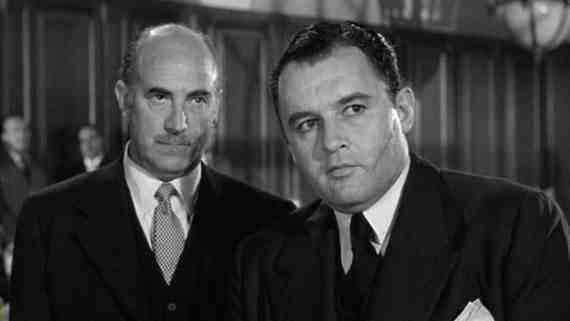 Long before Don Corleone or Tony Soprano, the face of Italian organized crime in America was Al Capone.

The difference, of course, is that Corleone and Soprano are fictionalized characters based on a type. Capone was the real deal.

Rod Steiger offers one of the best portrayals of the legendary “Scarface” in this straightforward account of the life of perhaps the most fascinating underworld figure in American history. In many ways, Al Capone was larger than life. And he seemed to enjoy it.

Unlike the mob leaders who came before him, Capone did not believe in operating in the shadows. He spoke with reporters on a regular basis, rubbed elbows with politicians and union officials, and was a patron of the arts with a real love for both opera and jazz.

While his devotion to opera is captured here, the jazz component is left out. But the clubs and bars he ran in Chicago often served as venues for some of the best jazz performers in the country.

“I’m a businessman, I serve the public,” Capone says early in the movie, as his rise from bodyguard for Johnny Torrio (Nehemiah Persoff) to the kingpin of Chicago’s Southside is tracked.

Steiger captures the persona perfectly. His Capone is both cunning and volatile, not unlike the real-life character. He is the tentative but ambitious Capone, arriving in Chicago with (literally) hat-in-hand, finishing a beer that another patron has left on the bar in one of Torrio’s joints, grabbing some lunch meat with his hand and stuffing it in his mouth.

And he is the bold and audacious crime boss, with the fancy suits, big cigars and diamond stickpins who literally shoots his way to the top. He arranges for two hitmen to take out Big Jim Colosimo (Joe DeSantis) as he and the mob leader listen to opera together. And when Torrio loses his nerve after nearly being killed by Dion O’Banion (Robert Gist) and the Irish gangsters from the Northside, Capone takes charge.

One of the best books—and there have been many—written about the man and the era is Get Capone by Jonathan Eig. Published in 2010, Eig’s book was written years after this movie came out. But both tell the same story and tell it exceedingly well.

The St. Valentine’s Day Massacre, the big mob confab in 1929 in Atlantic City and Capone’s retreat to Palm Island in Florida and his ultimate conviction on income tax evasion provides the outline for a story that in many ways defined an era in American history.

James Gregory, as the honest cop Schaeffler, provides voice-over narration that offers commentary on both the underworld and the political corruption of the day. He succinctly describes the corrupt nexus of gangsters, elected officials, and police that first came together during Prohibition and continued well after beer and liquor again flowed legally. “The underworld invaded the business world. The blackjack and the Tommy gun wore white collars and business suits.”

Steiger’s Capone never apologized for who he was or what he did. Some called him a Robin Hood. Others described him as the source of all evil in the underworld. In real life, Capone never shied from the publicity and often played off his tough-guy image, once telling a reporter, tongue perhaps in cheek, “You can get more with a kind word and a gun than you can with just a kind word.”

As for bootlegging, Capone never missed a chance to highlight the hypocrisy of Prohibition. When he sold liquor, he said, it was a crime. But when his wealthy customers served it in their homes, it was called “hospitality.”

Booze and broads and good times. Those were the 1920s in America. And Al Capone was in the middle of it all.

Dozens of actors have portrayed the Chicago gangster in movies based either directly or indirectly on his life and times. There was Paul Muni in Scarface and Robert De Niro in The Untouchables. Others include Neville Brand, Jason Robards, Ben Gazzara, and, most recently, British actor Stephen Graham who plays the young Al Capone in HBO’s Boardwalk Empire.

But for our money, nobody captured Al Capone’s character better than Rod Steiger did.

HIT: Voice-over narration was used frequently in 1930s gangster films and too often came across as breathless hype. Here, Director Richard Wilson uses it with just the right touch and James Gregory is effectively matter-of-fact in narrating the story.

MISS: The gang warfare that rocked Chicago during Prohibition was fought partly along ethnic lines, with the Southside Italians battling the Northside Irish. But the movie tends to go over-the-top with the accents. All the Italians speak guttural English with lots of “deese” and “dems” and all the Irish have a lilting brogue.

WHAT THEY WROTE AT THE TIME: “A tough, ruthless and generally unsentimental account of the most notorious gangster of the Prohibition-repeal era, Al Capone is also a very well-made picture. There isn’t much ‘motivation’ given for Capone, at least not in the usual sense. But the screenplay does supply reasons and they are more logical than the usual once-over-lightly on the warped youth bit.”—Variety

REALITY CHECK: Sensitivity and censorship were in play when Schaefler ends his narration of the movie by noting that Capone was released from prison suffering from an “incurable disease.” Capone died of cardiac arrest, but it was brought on by advanced syphilis. The movie did not mention the disease, nor was there any depiction of the sexual carousing believed to be the source of Capone’s affliction. Several reports indicate that Capone conducted “personal interviews” with each prostitute hired to work in the brothels his organization ran in and around Chicago.

REPEATED WATCHING QUOTIENT: While this is one of the best of the movies about Capone, it is not the kind of film that offers the viewer much new in a second, third, or fourth look. Once is probably enough unless you’re a real Rod Steiger fan.

BET YOU DIDN’T KNOW: The reporter Mac Keeley portrayed by Martin Balsam was based on Alfred “Jake” Lingle, who worked for the Chicago Tribune. Lingle was a “leg man,” a reporter who gathered information and phoned it in. He worked the crime beat in Chicago and had close ties to both Capone and the police. He was gunned down in 1930 in much the same way that Keeley is rubbed out in the movie. Like the Keeley character, Lingle had gotten entangled in mob business and had become less of a reporter and more of an expediter or go-between for various underworld factions and for the police. Several reports indicate that Capone had decided that Lingle’s “head had gotten too big for his hat.” But most sources indicated it was not Capone, but other gangsters who put the hit on the journalist.

BEST LINE: “Booze, gambling and broads—a guy could die happy in a place like this,” Capone tells Torrio shortly after arriving in Chicago while Torrio is showing him around the club that he owns.

VIOLENCE LEVEL: Lots of shooting, but none of the gory aftermath that dominates gangster movies of the current era.