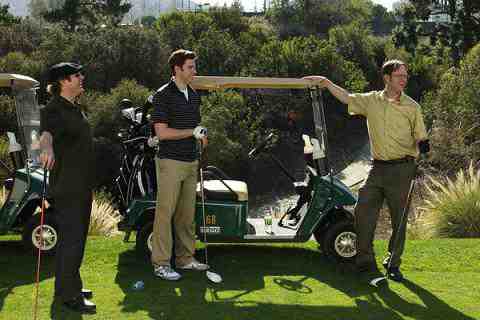 And so we end our trip to Florida with an episode entitled Last Day in Florida. I know I complimented the first two episodes of this event, but, like I mentioned last week, I realize now a lot of that had to do with the potential I imagined for the entire affair. That we got the Sabre Store so soon after they arrived in Florida disappointed me, and tonight, the Florida trip officially proved itself as a missed opportunity.

As we begin, Dwight’s promotion to Vice President of Special Projects has predictably gone to his megalomaniacal head. As Jim explains later, he’s turned into “Super Dwight.” Unfortunately, this excitement will be short-lived as the finally returned Robert California explains that he needs to fire Dwight even though he likes him.

The reason being is that Sabre’s products are crap, and, as Robert confesses to Jim in a scene that showcased the power of James Spader, the store would be great if they were carnival barkers who could leave town right after people give them money. However, Robert had to go along with the project because Jo gave it the green light, but since the store’s a “failure,” he can officially cancel the endeavor. Tragically, someone must fall on the proverbial sword, and that person must be the Vice President of Special Projects, Dwight.

One problem I have is- if Robert actually liked Dwight, if Robert liked anyone from Scranton, why would he send them on this suicide mission in the first place? The entire plan was set up to fail. Why then would he choose people from where he does half of his work to be part of the slaughter? Wouldn’t he rather keep them in Scranton where they can actually make money for the company? I believe Jim and Dwight are the best two salespeople at the Scranton branch, and he personally invited both of them along. I’m not discounting that this could be one of his schemes, but until we learn that it is, I’m going to chalk it up to bad writing.

Nevertheless, Jim tries to warn Dwight about being fired, but a cocky Dwight won’t listen to a word. After Pam pleads (and she seriously pleads) with Jim to try harder, he corners Dwight and tells him the truth. A still dubious Dwight walks away and heads towards the boardroom … when Jim tackles him. They spend the third act fighting in the hallway.

Dwight v. Jim was not nearly as entertaining as the scene from South Park’s Cripple Fight. New season begins March 14.

Throughout this season, I’ve commented about reality v. sitcom-reality when it comes to The Office. While the show has definitely skewed a lot more towards “sitcom” in recent years, I still find it difficult to accept that as its identity because this was a show born in “reality.” So when Jim topples Dwight and they engage in a long, drawn-out fight, it still comes across as unbelievable to me.

Moreover, Jim wrestling with Dwight to keep him from entering the boardroom seemed out of character for him. Jim’s the laid-back guy, he’s not going to throw down to keep someone from making a mistake. He did the only thing he could by telling Dwight the truth. I mean, Dwight isn’t even his friend. At best, he’s a frenemy. Put another way, let me ask you readers this, if your friend was about to go to his or her own metaphorical execution, would you assault them so that it didn’t happen? I know, Jim might have “owed” Dwight for getting rid of Cathy for him, but he paid that debt by telling him about the firing. And why was Pam so desperate to keep him around?

The fight keeps Dwight occupied long enough for Todd Packer to slide into the role of Vice President by making the presentation with Nellie, which leads to him taking the bullet meant for Dwight. ‘Tis a far, far better thing that he do… But this also puzzled me. This was a professional presentation. Wouldn’t Dwight’s name be on the documentation, the PowerPoints, etc. as Vice President of Special Projects? The entire “that guy’s there so he must be the guy” went beyond sitcom and into cartoony. Not to mention, how was Jim to know Todd was going to be there to take over the role? What if Nellie just gave the presentation herself? I got the impression that Robert was going to fire the VP because he couldn’t fire Nellie due to her connection with Jo. So if Dwight wasn’t there … Robert wouldn’t make an example out of anyone? He’d probably end up firing Dwight anyway. They needed a scapegoat.

Kevin in the SEASON 3 episode, The Convict…it becomes important later

However, Dwight was not the only character who earned screentime tonight. I think we spent more time in Scranton this episode than we have for the past month. Our home city even has 1.5 subplots instead of just 1.

The “1” plot involved Girl Scout cookies. Toby (with glasses) begins selling them on behalf of his daughter. However, this was Darryl’s territory for the past five years. In the spirit of competition, Darryl gives the HR Rep most of the office because all he really wants is Kevin. Kevin, realizing that they’re both competing for his cash, forces them to sing and dance, do chores, demean themselves, etc. as he decides from whom he will buy his 100+ boxes of cookies. At the end, Darryl and Toby decide to keep their dignity rather than continue to play Kevin’s game. It’s nothing new and not particularly amusing.

However, I wanted to take care of the ‘1’ so I could focus more heavily on the ‘.5’, which Scranton splits with Florida as it involves Andy and Erin’s relationship. Erin reveals to Andy that she plans to move to Florida, which upsets Andy greatly. At the end, he decides to go to the Sunshine State in order to win her back in a moment that I’m pretty certain was meant to be heartwarming and possibly make us want to cheer. It failed on both counts.

I don’t know the point at which something becomes “belabored,” but I think I’m dangerously close to that threshold when it comes to talking about Andy and Erin. But the show keeps bringing it up so I have to keep commenting on it.

Second verse is not the same as the first, no matter how hard they try

Overall, this entire plot line is just cheap and needless drama. It’s a poor attempt to recreate Jim/Pam except with a hero that is next to impossible to root for and a heroine that lacks the intelligence and fight of early Pam. (Though, as I’ve said before, Kemper has done good work this season.) Like Jim and Pam, arguably the biggest obstacle between this duo is a significant other, in this case Andy’s. However, unlike Roy who perfectly represented the “trapped in one’s own miserable life” quality of early Office, Andy’s girlfriend lives in a time when the key words for this show are happy and silly. Additionally, Roy existed “before” the show, and you could understand why Pam was engaged to him, even if she wasn’t happy being with him. Andy’s girlfriend was only created to keep Andy and Erin apart. Nothing is keeping Andy tied to his girlfriend and his feelings for her seem lukewarm at best, so this forced unrequitedness only serves to make Andy come across as too weak to stand up for himself– not the quality you’re looking for in a romantic lead. And that’s what makes this Andy/Erin storyline such a dud. No one wants to see Princess Vespa get with Prince Valium.

• Since the beginning of this plotline, I’ve mentioned that one my biggest issues with the idea of a Sabre Store is that all we know about Sabre products is that they are crappy. I was quite pleased that show remembered this and actually explained why the store existed even despite this fact. Continuity goes a long way.

• Cathy’s still hanging around, and she’s fallen into the role of Nellie’s silent lackey apparently. I guess now that banging Jim’s out of her system, she once again has zero to do. Fire her, Scranton.

• I thought one of the best lines of the night was Darryl’s: “When I first started selling cookies [Kevin] was a relatively thin man. Not a thin man mind you. Relatively thin.” Unfortunately, it was contradicted by something Darryl said not a scene earlier. He claimed that he was selling the cookies at the office for five years. That would have been season 3 of the show when Kevin was already pretty hefty. See above.

• Community returns next week at 8 EST.