Slasher movies took a gruesome turn in the 1970s, with flicks like Wes Craven’s Last House on the Left (1972) and Meir Zarchi’s 1978 shocker I Spit on Your Grave (alternately titled Day of the Woman) heading up a strange and disturbing trend: the rape-revenge movie. Whether they were viewed as a backlash to second-wave feminism or as empowerment films, these movies caused an uproar among audiences and critics alike.

Wes Craven’s first film Last House on the Left is based on Ingmar Bergman’s The Virgin Spring. Two young women who had the gall to attend a rock concert in the big city are raped, tortured, and murdered by a creepy “family” of druggies and psychos. When the perpetrators end up at one victim’s home, her parents wreak the most horrific revenge thinkable. It’s a frightening little indie that relies on an implausible but poetic narrative and extreme tension, and critics often had good things to say (Roger Ebert gave it 3.5 stars).

It’s only a movie: the poster for the 1972 Last House on the Left

On the other hand, Meir Zarchi’s I Spit on Your Grave was terribly received. It contains a grueling, unspeakably hard to watch 45 minute gang rape scene after which the victim takes revenge into her own hands, using her feminine wiles to lure her rapists, then murder and maim them one by one. Ebert called the original a “vile bag of garbage” that displaced the cruelty of its villains into a vocal and disturbing audience. It is either a) an abominable treatment of material that’ll make your stomach roil, or b) a “misunderstood feminist film” (sorry, I’m a feminist and I don’t buy option b). Reports surfaced the other day that Anchor Bay will release a remake of I Spit on Your Grave.

I Spit on Your Grave: Reprehensible, or just misunderstood?

I journeyed to the theater to see last year’s remake of Last House, and while it was an experience in audience psychology, it was neither new nor interesting. The story changed a bit, and some characters were granted sympathy instead of gruesome deaths, but it was totally unnecessary. During the rape scene, though, you could have heard a pin drop in the theater. My chest tensed, I stopped breathing, and I suddenly sensed that everyone else in the theater was also watching this horrific thing happen–not a lot of movies make you feel that way. 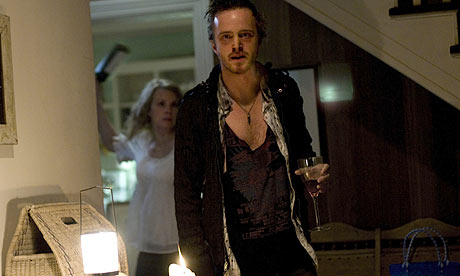 Aside from an interesting movie-going experience (assuming you’re capable of maintaining emotional distance–and many aren’t), what can a I Spit on Your Grave remake possibly bring to the table? The rape-revenge trend is a fascinating bit of cinematic history because at worst, these movies supplied a forum to discuss feminism, misogyny, and audience psychology. Thirty years ago the trend provided a valuable lens through which to examine the motivations of filmmaker and viewer. Some of the last decade’s horror releases (An American Haunting and Silent Hill, for instance) are on a base level rape-revenge movies. The supernatural path those took is far more interesting than all these remakes. Now, the highest-grossing horror franchise is Saw, and there’s always space in theaters for torture-porn like the Hostel movies. It seems we’re just in it for the guts, gore, and laughably bad acting. Don’t get me wrong, I love some B-horror, but why must we dredge up old corpses (pun intended)? Come on, Hollywood. There’s plenty of horror in our everyday lives. Come up with something new and quit beating the old horses to death.

All photos copyright their original owners.

(The Oscar) has a reputation as one of the biggest turkeys in Hollywood history, in large part due to its inclusion in The Golden Turkey Awards, a book dedicated to cataloguing the worst films ever made. To film critics, The Golden Turkey Awards are rather like The Necronomicon, except that both the book and the horrors that it calls forth are terrifyingly real.

Today we take a different look at the master horror directors. Each of these moviemakers has made an iconic footprint on the history of scary cinema, whether with a well-worn franchise or in a single terrifying stroke. In many cases, the great success of such a film overshadows a director’s lesser works. Some are forgotten with good reason, but others are worth reviving now and again. Join William Bibbiani, Julia Rhodes, and myself (Dan Fields) as we discuss the neglected offspring of the great names in horror.

The sign on the hill. Is Hollywood truly the den of iniquity we mortals perceive it to be? Ah, the good old […]

This week marks the release of what’s sure to be the masterpiece of 2010 (aside from Sharktopus, that is): Piranha 3D. To […]

2 thoughts on “The I Spit on Your Grave Remake: Why?!”