The weakest of the major networks, NBC is the first of the four to release their 2011-2012 schedule. Instead of waiting for Monday, the Comcast-owned Peacock Network sent out the information this Sunday leading bloggers to offer comments and predictions based on series they’ve seen less than a minute of, if that. I’m basing all my information on the circulated press release so any spoilers come from there. I am also avoiding commenting on any midseason replacements.

Not to be confused with The Voice, The Sing-Off features a cappella acts battling in competitive singing. Already entering its third season, The Sing-Off has clearly contributed to the noticeable rise in a cappella singing that has yet to occur anywhere. It’s also interesting to see NBC continuing its misguided trend of making all its reality programs run two hours every week.

Set in the 1960s, The Playboy Club stars Amber Heard (The Informers, Drive Angry, Zombieland) as a Playboy bunny at the Playboy Club in Chicago. Described as “provocative,” the show focuses on her making it through the changing times of one of the most tumultuous decades in our recent history while encountering rich and famous politicians, criminals, and mobsters and dealing with inter-club politics similar to those in last year’s Burlesque. Despite the casting of Heard- an actress with definite movie star quality- this attempt to capitalize on the popularity of Mad Men probably needs the weight of a show of that quality to work while simultaneously having far more mass appeal. Period pieces are incredibly difficult to pull off on television, especially network television. Viewers rarely flock to them and, to connect with an audience, some writers might feel compelled to pull the often embarrassing “See! Things were different back then!” attitude that even Mad Men struggled with during its first season. Throw in a bunch of people imitating famous people (exceedingly hard to do on a consistent basis without being cheesy) and a subplot where Heard’s character kills a mob boss, and the chances for survival are doubtful. Then again American Dreams ran for three years but Young Girl Dances For Dick Clark probably had more levity than a show that will have the Parents Television Council outraged based on title alone.

I do not watch either of these shows, but I know Parenthood has its fans so congratulations to them.

Not a fictionalized account of the Rhonda Sheer/Gilbert Gottfried series, Up All Night is a comedy that purports to be a “modern take on parenthood.” Starring Will Arnett (Arrested Development, 30 Rock) and Christina Applegate (Married with Children, Anchorman) as two new parents (she’s the professional, he’s the stay at home dad, it’s a crazy switcheroo!) and Maya Rudolph (Saturday Night Live, Bridesmaids) as Applegate’s still carefree friend, the series has a relatively strong cast. However, it’s safe to be wary of any show that claims to be a “modern take” on anything. Additionally, parenthood as a comedic topic tends, probably more than any other topic, to lead to reliance on stupid and overused clichés.

Continuing to spread the laughs over two nights instead of this season’s three hour Thursday chunk, NBC also presents Free Agents. Based on a British series, Free Agents tells the story of two public relation executives (Hank Azaria (The Simpsons, The Smurfs, Herman’s Head) and Kathryn Hahn (Crossing Jordan, The Goods)) trying to put their lives together after a divorce and widowing, respectively, and their attempt to have a relationship with one another. From the plot description, this show seems to have a darker spin than most of NBC’s comedies and might be closer in spirit to the more character-based Parks and Recreation (albeit more dramatic) than any of the other series on the line-up. Or I could be entirely wrong and the tone could be completely goofy with zany date related mishaps and interoffice sex. Fun fact, Christina Applegate also plays a public relations executive in the previous show. 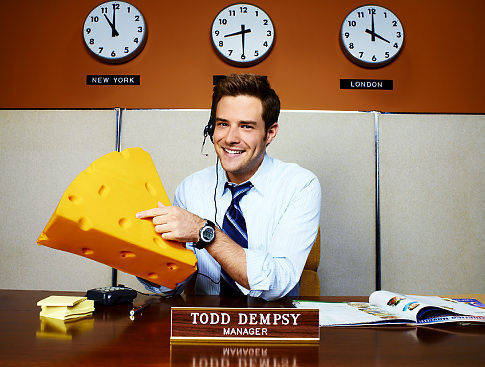 Thursday remains one of NBC’s most problematic nights, but it’s probably the channel’s best night for programming. This season’s attempt to air three straight hours of sitcoms did not work, despite having some decent shows. Luckily, NBC canceled Outsourced– the series about a American call center manager in India who treats all his employees like children and might be one of the most all around unlikeable and douchiest protagonists in recent television history. Perfect Couples, however, had kind of a charm. Also luckily, the two best shows (Community and Parks and Recreation) stick around for another season, and it will be interesting to see where The Office goes with the departure of Steve Carrell. Obviously, one of the first things anyone should notice about this line-up is the absent 30 Rock, which is being replaced spiritually by Whitney.

Starring comedienne Whitney Cummings, Whitney is described as “a hilarious look on modern love.” Again that word “modern.” In a five-year relationship with her boyfriend, Whitney fears “relationship boredom” and, after one aborted night attempting mutual seduction, they decide that they love each other. The show description sounds more like a pilot description than anything else, so I guess the rest of the series will be about a couple in a happy relationship. Exciting. It’s also “multi-camera,” which means laugh track, which does not fit with the rest of the line-up of single camera shows. And, from the promo, the pacing and delivery are scarily like that of the typical sitcom that we should have moved past already.

Prime Suspect is an update of a classic British television series and stars Maria Bello (A History of Violence, ER) as a homicide detective who has to prove herself in a man’s world. Oh, and she has a secret past. I guess it’s about time for NBC to try a new procedural franchise now that Law and Order: Special Victims Unit is the last man standing of Dick Wolf’s more-than-two-decade-old crime drama (other than L&O:UK).


Every year it looks like Chuck isn’t going to survive and every year it does, although this time it truly does seem as though it’s the end. An enjoyable show albeit one with bad ratings, Chuck somewhat improved this year by returning its focus on the main characters and featuring Timothy Dalton as a more interesting villain than Brandon Routh.

Grimm is an action thriller about a homicide detective who learns that he comes from a family of Hunters who must keep humanity safe from supernatural creatures. These supernatural creatures are the evils from the legendary Brothers Grimm fairy tales. Though it sounds like a combination of Terry Gilliam’s lesser 2005 film and Supernatural (airing on the CW Fridays at 9 this season), the show was created by David Greenwalt who has genre credibility from his work on Angel and Buffy, the Vampire Slayer as well as respected short-lived series Jake 2.0 and Profit.


Not much to say here except I’m curious to see what NBC will put on Sunday if the NFL strike happens. Remember that year when every night had an edition of Dateline?u

The mythology behind the Wonderland books is so complex, there are sure to be disappointed diehards, but Alice in Wonderland is a fun reinterpretation of the stories so many of us grew up reading and watching. It is easily the most visually impressive release since Avatar, and though it’s by no means Burton’s best movie, it is among his better ones.

Smith, in his first role in four years, appears refreshed and re-energized as an actor. His performance in Men in Black 3 relies more heavily on comedic timing and verbal sparring than on silly faces and faux macho bravado. The real success of the film comes from the wonderfully talented supporting cast. Nothing will prepare you for Brolin’s dead on performance as a younger Tommy Lee Jones. Somehow, Brolin has mastered Jones’ vocal cadence and the rhythm with which he delivers his dialogue and one-liners.

We already know how the Governor functions, and we don’t need more evidence of his shortcomings as a human being. We don’t want Michonne to lose any of her badassery as she becomes more attached to Carl and Rick. We know Rick likes to play the hero. We didn’t need an entire episode to pound in these aspects of our characters.

After they elevated Andy to the star, the show and the character suffered tremendously. His unlikeable edges were dulled down to create a milquetoast figure that it was difficult to root for, partly because the show made it so obvious how much they wanted the audience to root for him. But I can’t deny that it is bothersome for the show to have rendered his journey over the past two seasons moot.